The fifty-five year old lingers by us for a moment to prepare for an exhibition of his paintings taking place this Autumn. Aleister Crowley is a painter from passion. He would have to be, since as an mountaineer he has seen moods of air & light never before accessible to human eyes. Crowley conquered all the summits of Mexico and afterwards undertook two attempts to subjugate the Himalayas. The last of his Himalayan expeditions took place in 1905. Crowley climbed to a height of 7000 meters before a mutiny forced him to turn back. He has set down his experiences as a mountaineer in a series of books, which along with his life confessions, adventures and poetry (Crowley also lived for a time as a Yogi) have just begun to appear in England. Crowley provided the leader of the just raised German Himalayan Expedition advice on climbing a specific glacier.  If the expedition follows his advice – said Crowley to his interviewer, they will reach the summit, otherwise they’ll be ruined. “The Germans have excellent prospects with this adventure.”

Crowley, the gentleman-bohemian, is a controversial phenomenon for the English public. Some see him as a revolutionary philosopher, others as a foolish artist. That this mountain climber, chess player, poet-philosopher & painter is one of the most remarkable characters, will be disputed by no one. To us he offers a cross between Karl May and Schopenhauer, perhaps he is much more, perhaps less. 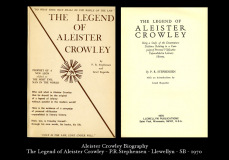