A row has broken out in Portugal’s literary world over plans by heirs of the nation’s most famous modern poet, Fernando Pessoa, to auction his unpublished manuscripts and letters.

When the poet died in obscurity in 1935, he left a trunk full of documents that included extensive correspondence with the eccentric English astrologist and magician Aleister Crowley, a practitioner of the occult said to have inspired satanism in Britain.

Portugal’s National Library fiercely opposes the private sale of documents considered vital to the nation’s literary heritage, and warns it will take all legal measures to stop the sale and dispersal of the archive, the Lisbon daily Publico reports.

Pessoa’s nephews favour selling the material, piece by piece. Scholars say that would make a definitive study of the poet’s unpublished work impossible. The government has declared no formal interest, apparently reluctant to inflame the market, Publico says.

The angst-ridden poet died in 1935 of cirrhosis of the liver, aged 47, leaving his papers in turmoil. His best known work, The Book of Disquiet, the tormented fictional diary of an accountant, was – like most of his output – published posthumously.

But collectors have long coveted the so-called Crowley Papers – whose value one expert said this week was “incalculable” – to illuminate the friendship between these two odd characters.

The dossier includes voluminous correspondence with Crowley, and hundreds of pages of an unfinished novel about Crowley’s faked suicide. The work is called Boca do Inferno, (Hell’s Mouth) after a rocky inlet near the Portuguese resort of Cascais.

Pessoa, intrigued by Crowley’s mysticism, struck up a correspondence with the Englishman. The flamboyant Crowley visited Lisbon in 1930, and the friends played chess together. Crowley then disappeared, leaving his cigarette case and a handwritten suicide note on the clifftop above the crashing waves at Hell’s Mouth.

It was a trick, apparently to elude a discarded lover. Crowley slipped across the border to Spain, emerged weeks later in Berlin and died in Hastings, Sussex, in 1947, penniless and addicted to heroin. Pessoa mounted a polemical play about the “suicide” and doubts swirled over his role in the affair, and the nature of his relationship with Crowley.

When news of the sale emerged this week, experts said any bidding war would far exceed the budget of Lisbon’s national library. The library’s director, Jorge Couto, is reportedly seeking a deal with the family.

A law of 2007 can authorise the library to block international sale of manuscripts considered to be of national heritage value. 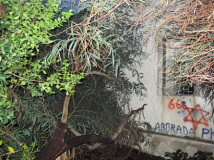