Aleister Crowley: The Beast 666 a film by Donna Zuckerbrot is now available on DVD from Reel Time Images www.reeltimeimages.ca

This documentary aired on VisionTV and Space in Canada as part of the Enigma series and will be broadcast on HDNet in the US in the Fall.

This is an introduction to Aleister Crowley for a general audience. Lon Milo DuQuette helps illuminate some of the basic ideas of ceremonial magick as well as sharing how his life has been transformed by Aleister Crowley’s influence. Interviews with Richard Kaczynski and Marco Pasi give us further insight into Crowley’s work and the basics of Thelemic magick.

While Crowley is undoubtedly a complex figure with complex beliefs, this film attempts to understand him on his own terms and transmit the essential ideas in a clear and accessible manner. 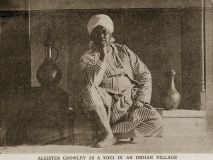