Weiser Antiquarian Books is pleased to announce the release of the forty-fifth of our on-line catalogs. This [forty-fifth online] catalog comprises a significant collection of manuscript materials, printed works, and a typescript, relating to John Whiteside (“Jack”) Parsons.

Jack Parsons was born exactly ninety-four years ago, on October 2nd, 1914, and went on to become one of the most interesting and captivating figures in twentieth century occultism. A charismatic California bohemian, he was also a pioneer rocket scientist, and a committed magician, who was for a time during the 1940s the head of Agapé Lodge of Aleister Crowley’s Ordo Templi Orientis (O.T.O.).

The word ‘unique’ is often over-used by booksellers, but it is appropriate to this collection. Of course by its very nature all manuscript material is unique, but it is also virtually unknown for such material from Parsons to be offered for sale. In fact the only other Jack Parsons manuscript that we are aware of ever to have been offered for public sale was a hand-drawn astrological chart that we listed in our Catalog Eighteen. Even the catalog itself is unique, it being the only bookseller’s catalog ever issued that is exclusively devoted to Jack Parsons.

The manuscripts offered are mostly from the collection of Jack Parsons’ first wife, Helen Parsons Smith, and a number were evidently at one time in the hands of Crowley aficionado and former-student Gerald Yorke, whose annotations they bear. Several of the items – such as his manuscript notes for a “Church of Thelema Service for the Dead,” and an unpublished twenty-nine page piece, comprising the Introduction and First Chapter of an unfinished work: A Treatise on Sexual Morals – appear to date from Parsons’ time with the O.T.O.

Other manuscripts relate to Parsons’ post O.T.O. projects including “the Gnostic Church,” in which – taking his lead from Crowley’s Gnostic Mass and W. T. Smith’s “Church of Thelema” – he attempted to organize a magically inclined devotional group, and “The Witchcraft” his plan to teach a course on practical magic to a group of paying students. Amongst the material relating to these groups, are a nine-page holograph manuscript “Manifesto of the Witchcraft” with unpublished appendices of a Course Outline and Registration and Membership Form, and a largely-unpublished sixty-five page holograph manuscript “Gnostic Church. Basic Magic and Witchcraft.” Parsons also worked on several texts that may have been intended as course books for these groups, or perhaps as independent books in their own right. Several significant examples of these are listed, notably a 42 page manuscript entitled “The Tree of Life: Introduction,” and a 108 page manuscript section of a projected book on magic, “Basic Magic. Introduction. Lesson I & II.”

One, of the most important of the manuscripts is that in which Parsons details his “Black Pilgrimage,” of 1948 – the retirement in which he “crossed the Abyss,” and is from the papers of Parson’s former mentor Wilfred T. Smith, to whom Parson’s announced his success, and formally declared that he had become a “Master of the Temple.” A separate item, dating back to their earlier, happier days together, is a typescript of Aleister Crowley’s play, The World’s Tragedy, presented to Parsons by Smith.

The manuscript sections of the catalog are followed by listings for a small collection of books and journals containing material by Jack Parsons, and another group of books either written about Parsons, or with significant references to him. It closes with an announcement concerning the forthcoming publication by Teitan Press of A Bibliography and Research Guide to the Life and Works of John W. “Jack” Parsons.

As usual we have a variety of other catalogs in preparation. Future catalogs will be devoted to Alchemy & Hermetica, Astrology, Mythology, Theosophy, John Dee, Grimoires, Witchcraft, and other of our specialties, with a few suprises along the way. Of course we will also continue to regularly issue our Aleister Crowley catalogs.

The books in these catalogs represent just a minute fraction of our overall holdings. We currently list nearly 10,000 other mostly esoteric-related titles on our main website: www.weiserantiquarian.com with new stock added weekly.

Again, if you wish to view the books in this current catalog simply click on: 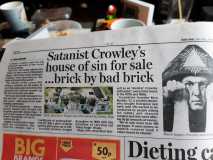