Weiser Antiquarian Books is pleased to present the Fifty-third of our on-line catalogs, once more devoted to Aleister Crowley and his circle.

It is the first Crowley catalog that we have issued in some time, and is thus something of a “bumper” issue. The catalog is divided into seven sections, the first of which features signed copies of James & Nancy Wasserman’s, interesting new book To Perfect This Feast. A Commentary on Liber XV. The Gnostic Mass. The second section is devoted to First & Early Editions of works by Aleister Crowley. It contains a nice selection of First Editions of early works of Crowley’s poetry, including Jephthah; and other Mysteries Lyrical and Dramatic (1899), The Mother’s Tragedy (1901), Oracles. The Biography of an Art (1905), Orpheus. A Lyrical Legend (2 Volumes, 1905), and The Soul of Osiris (1901). The same section also includes four numbers of the First Edition of The Equinox, an interesting association copy of The Heart Of The Master (1938), and several other works.

The third section of the catalog is devoted entirely to an important archive relating to C. F. Russell and his magical fraternity the G .’. B .’. G .’.. It comprises a large number of letters from C. F. Russell to John Paul Kowal, instructions for the Order, magical texts, and much more. Over 350 pages in all. The archive was assembled by John Paul Kowal (1900ˆ1978), Frater Sapientia, a chiropractor with a strong interest in the occult. Already a Probabtioner of Crowley’s A .’. A .’. under Gerald Yorke) and an aspirant of the Universal Brotherhood, Kowal was accepted as a Neophyte of the G .’. B .’. G .’. (Gnostic Body of God) in June 1930, and rose through the grades, attaining that of Dominus Liminis in 1934. Together the letters and other documents form an archive that gives a unique insight into the history, practices and philosophies of the G .’. B .’. G .’. in its early years.

The fourth section of the catalog contains books and ephemera relating to Crowley’s one-time disciple Victor Neuburg and his Vine Press. It includes inscribed copies of four works by Neuburg, a rare copy of Ethel Archer’s Phantasy and Other Poems published by him, and a small collection of Christmas cards and other ephemera issued by the Vine Press. Of particular interest are two works formerly owned by Neuburg: his copy of Daniel Defoe’s History of the Devil, Ancient and Modern. In Two Parts. …. (1822) with Neuburg’s ownership inscription, and his copy of the First English edition of Éliphas Lévi’s Transcendental Magic: Its Doctrine and Ritual (1896), with Neuburg’s presentation inscription to his friend Olivia Haddon, dated on the day that she joined the A.’. A.’., with Neuburg acting as her “Introducing Neophyte.”

The fifth section comprises a group of biographies, and memoirs that make mention of Crowley. It includes a copy of Nina Hamnett’s Laughing Torso (1932), a book that caused Crowley to initiate a libel action that ultimately ended in his bankruptcy, and an association copy, in the scarce dustjacket, of Louis Marlow’s Forth, Beast! 1946, a work that contains numerous references to Crowley, and which he greatly enjoyed. The penultimate section comprises a number of Thelemic journals, including a complete run, and various loose issues, of Sothis, and a selection of issues of Starfire, The Cincinnati Journal of Ceremonial Magick and The New Equinox. The final section is a miscellany of works by and relating to Aleister Crowley, ranging from modestly priced recent reprints, to rarities, including a First Edition of a work that Crowley held in high esteem: Ida Craddock’s Heavenly Bridegrooms. An Unintentional Contribution to the Erotogenetic Interpretation of Religion (1918), and a scarce First Edition set of The Shadow Tarot [Book & Cards] (1991),by Linda Falorio with Fred Fowler, a set that greatly impressed Kenneth Grant.
As usual we have a variety of other catalogs in preparation. Future catalogs will be devoted to Eastern Religions, Robert Anton Wilson, Hermetica, Witchcraft, Astrology, Kabbalah, Grimoires, Theosophy, and other of our specialties, with a few suprises along the way. Of course we will also continue to regularly issue our Aleister Crowley catalogs and have several more on mythology still to come.

The books in these catalogs represent just a minute fraction of our overall holdings. We currently list nearly 10,000 other mostly esoteric-related titles on our main website: www.weiserantiquarian.com with new stock added weekly.

Again, if you wish to view the books in this current catalog simply click on: 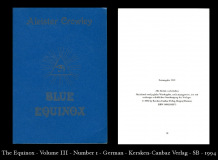