A selection of used and rare books and ephemera may now be viewed at: Weiser Antiquarian.

Weiser Antiquarian Books is pleased to announce the release of the sixty-sixth of our on-line catalogs. This catalogue is another of our regular series devoted to Aleister Crowley, and comprises the usual eclectic mixture of antiquarian and modern books and ephemera.

Amongst the older volumes are two unusual works which touch upon Crowley’s adventures as a mountaineer: the Jahrbuch des Schweizer Alpenclub 1905 bis 1906 (1906), which contains a French-language account of his Kanchenjunga expedition, and Walter Larden’s Guide to the Walks & Climbs Around Arolla (1908) with several comments by Crowley about his climbs in the area. There are also works such as UK First Editions of The Diary Of A Drug Fiend (1922), and Moonchild (1929), and a scarce copy of the Karl Germer edition of Magick Without Tears (1954), still arguably the best and most complete of the editions that have been published, complete with its original prospectus. Alongside that is an original handwritten and signed document by Crowley on O.T.O. letterhead, which is a receipt for moneys paid to him by Anne Macky, one of those for whom the letters that make up Magick Without Tears were expressly written. Other unusual ephemeral items include two different postcard versions of Liber Oz (1942), each with a portrait photograph of Crowley, a short letter (1944) from Crowley to his friend Edward Bryant who assisted with the Thoth tarot exhibitions, and two autograph postcards from Frieda Harris – artist executant of the Thoth tarot deck – to former Crowley associate Edward Noel Fitzgerald.

Modern works include several of the 93 Publishing Equinox series, a good selection of Teitan Press Crowley works, signed by the Editor Martin P. Starr, and two unusual volumes released by Helen Parsons Smith’s Thelema Publications. On the quirkier side there is a lovely example of the “Far-Out” edition of the Book of Thoth (Kashmarin Press, 1969) with it’s great “cut and paste” design dustwrapper – probably the only Crowley book published with the words “far-out” on it. Also strongly reminiscent of the times are a number of issues of Herman Slater’s Earth Religion News some of which include Crowley material, and generally provide an interesting, if rather embarrassing, glimpse of occult-culture in the USA at the time.
As usual we have a variety of other catalogs in preparation. In addition to more in our Witchcraft series, future catalogs will be devoted to Astrology, Hermetica, Ancient Egypt, Mythology, Theosophy, Grimoires, Secret Societies and Conspiracy Theories, and other of our specialties, with a few surprises along the way. Of course we will also continue to regularly issue our Aleister Crowley catalogs.

The books in these catalogs represent just a minute fraction of our overall holdings. We currently list nearly 10,000 other other mostly esoteric-related titles on our main website: www.weiserantiquarian.com with new stock added weekly. 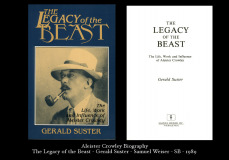