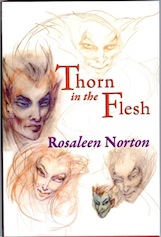 Newly released by The Teitan Press:

Thorn in the Flesh
A Grim-memoire With an Introduction by Keith Richmond

Rosaleen Norton, the so-called “Witch of Kings Cross,” was a natural rebel whose bohemian lifestyle, outspoken occultism, and unusual and often sexually-charged artwork attracted widespread condemnation from the conservative establishment in twentieth century Australia. She suffered frequent arrests, her art exhibitions were raided, a book of her art banned in both Australia and the USA, and in one notorious case, her paintings were burned at the censor’s order. She died in relative obscurity in 1979, yet left the world a rich and unusual artistic legacy. Some of this was hidden away in two battered metal trunks which contained fragments of her unfinished autobiography, Thorn in the Flesh, various occult writings, letters, drawings, poems, photographs, small paintings, and scrapbooks. It was Norton’s wish that one day a selection would be made from this material, and it would be published.

This book is that selection. It comprises poetry (often humorous), reminiscences, and various occult jottings, with reproductions of two stunning photographs of Norton, as well as some half-a-dozen examples of her art (mainly in color). Most of this material has never been publicly seen before. Although by definition fragmentary, the texts combine to give a very personal introduction to the magical world of this truly remarkable woman. The book includes an Introduction by Keith Richmond, who has previously edited a collection of Norton’s short stories: Three Macabre Stories, and played a key role in organizing the “Occult Visions of Rosaleen Norton” retrospective of her art that was held in Sydney in 2000. ISBN: 9780933429161 NEW book. $50.00

For two weeks only – or until supplies run out – Weiser Antiquarian Books will include a free CD of Rosaleen Norton reading from her own work with each copy of Thorn in the Flesh that is sold. This offer is exclusive to Weiser Antiquarian Books, and is limited to one CD only per copy of Thorn in the Flesh purchased, with a maximum of two books with CDs per-customer (there is no limit on the purchase of extra copies without CDs). This offer is only open to retail customers ordering direct from Weiser Antiquarian Books, via our website, or by phone, email, or mail – it does not apply to books purchased from us through other sites. See below for more information about the CD.

(The shipping cost for multiple-copy orders varies according to quantity and destination.)

Place your order direct via our secure website at: http://www.weiserantiquarian.com

About the CD. Each CD is in a jewel case, with printed contents sheet. The first five tracks of this CD comprise a series of readings by Rosaleen Norton from “The Uncanonical Tripod,” a humorous magazine that she wrote, but apparently never printed. The recording starts with two pieces of anti-totalitarian satirical poetry, followed by a parody of Buddhist teachings in the form of a bogus “letter from Tibet,” a ballad to a “ghoul-friend” (girl-friend), a spurious account of the origins, editorial policy and staff of “The Uncanonical Tripod,” and two mock biographical pieces. The final track is a lengthy autobiographical “letter” that Norton taped for a friend named Terry in Adelaide, South Australia. The recordings are taken from “reel-to-reel” audio tapes made by Norton’s friend “The Druid Alpha” in the mid-1970s. The original tapes have suffered some deterioration, and although they have been professionally remastered for this CD, the sound is not perfect. Despite this they convey a real sense of the warmth, charm and wit of Norton.

Pictures of the book, and information on other Teitan Press titles, can be seen at www.teitanpress.com