The Wickedest Books In The World

I am thrilled to publish this announcement from the author…

Privately published by the author in a limited edition

“THE WICKEDEST BOOKS IN THE WORLD” is a large format (9 X 12) coffee table-style hardcover book containing over 50 glossy full color photographs of the rare, often magnificently produced, first edition books of the renowned British occultist, Aleister Crowley that are currently in the collections of the author and fellow bibliophile, Danny Carey.

Printed and bound by one of the top printers in the world, this first hardcover edition is strictly limited to 1000 copies, with the first 156 copies numbered by way of an anti-consecrated page carefully removed from the author’s personal copy of the 1922 British first impression of Crowley’s notorious The Diary of a Drug Fiend (placed inside a clear envelope). Additionally, the first 333 copies are individually numbered and SIGNED by both the author and the author of the book’s foreword, DANNY CAREY (who is featured throughout the book as avid collector of Crowleyana).

From the book’s dust jacket flap: “Those who have opened this book merely out of curiosity might want to close it while there is still time. This is the author’s caveat in the introduction, having, himself, become obsessed with collecting the exceedingly rare, limited first editions of Aleister Crowley – a hedonistic freethinker, esoteric philosopher, and self-proclaimed prophet of Thelema, whom the international press once labeled “The Wickedest Man in the World.” For Blair MacKenzie Blake, it all began after he chanced upon a first printing of Crowley’s novel, Moonchild: A Prologue in a little book store off the Las Vegas strip. Despite a price sticker of $1,650.00, he felt compelled to purchase it; unaware at the time that the book’s author had performed magical operations to ensure the literary success of his prolific output. But, in the pursuit of wealth and fame from his writing endeavors, was it a requirement of the trans-mundane intelligences contacted, or just a clever scheme by the author to create complexity and rarity, that caused the Great Beast 666 to control nearly every aspect of a book’s production, including typefaces, paper, bindings, size, color, price and astrological publication dates? Whatever the case, there can be little doubt that the magical techniques employed were effective. Especially on the present author (and a close friend), who have for years attempted to overcome this particularly insidious form of bibliophilia, only to find themselves repeatedly hunting for scarce Crowley titles on the e-landscape or in dusty antiquarian shops.” 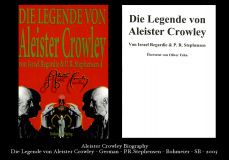