In: News
With: 0 Comments

It will come as absolutely no surprise to regular visitors to LAShTAL.COM that the latest online catalogue from Weiser Antiquarian is overflowing with extraordinary items…

New York born Arthur Edward Waite (1857 – 1942), was arguably one of the most significant writers on the occult and mysticism of his time period. Although lampooned by Aleister Crowley for his occasionally ponderous prose, Waite had a staggering breadth of knowledge and wrote intelligently and critically on subjects as diverse as Rosicrucianism, Ritual Magic, Tarot, Mysticism, Grail Lore, the Kabbalah and Freemasonry, and also prepared translations of a number of significant Alchemical texts. Waite’s translations of the magical works of Éliphas Lévi played a significant part in bringing that author’s work to the attention of the English-speaking world and he was of course the co-creator (with Pamela Colman Smith) of what is still one of the most popular Tarot decks ever produced, the partially-eponymous Rider-Waite deck. Even his detractors could not deny Waite’s importance, with Crowley at one time reflecting candidly that: “If it had not been for Waite I doubt if, humanly speaking, I should ever have got in touch with the Great Order.”

Arthur Edward Waite joined the Hermetic Order of the Golden Dawn in 1891, but resigned after six months and instead devoted himself to editing the journal “The Unknown World,” a rival to the Theosophical Society’s magazine “Lucifer.” In 1896 he rejoined the Golden Dawn, but throughout the early 1900s he drifted away from the Order’s magical teachings, and along the path of mysticism, in the course of which he became a Freemason and joined the Societas Rosicruciana in Anglia. After the final collapse of the Golden Dawn, he founded his own mystical group, the Fellowship of the Rosy Cross in 1915. In the course of a very active literary career Waite published nearly fifty books of his own writing. He also edited and/or translated nearly forty works by others, wrote and had privately printed over three dozen rituals and related works, and penned a large number of essays, poems, and letters, which he contributed to a variety of periodicals.
The catalog may now be viewed at: www.weiserantiquarian.com/catalog

Weiser Antiquarian Books is pleased to announce the release of the eighty-fourth of our on-line catalogues, a special list devoted to books by and about Arthur Edward Waite. To view the catalog, simply click on the link above. If the link does not work direct from your email, please cut and paste it into your web browser. If your web-browser shows an earlier catalog of ours at the above link (ie it is not ‘refreshing’ properly) a duplicate copy of our new catalog is on-line at: www.weiserantiquarian.com/catalogeightyfour

This catalogue reflects the diversity of Waite’s written legacy. It comprises material from three important private collections, and in addition to listing a number of rare first and early editions of Waite’s works, it includes a number of inscribed copies, association copies, books from Waite’s own library (with his annotations), privately printed materials from his own occult fraternities, and some manuscript items. Such material – that is with a personal connection to Waite – is seldom seen in private hands as most that has emerged or been offered for sale in the last forty or so years has been assiduously gathered together and is now in the permanent collection of an Institutional Library.

There truly are too many unusual items in this catalogue to treat adequately here, but amongst the rarities by Waite are an unusual leather bound edition of The Book of Black Magic and of Pacts (1940) produced by the notorious book-pirate L. W. de Laurence, an original set of unbound sheets of Belle and the Dragon. an Elfin Comedy (1894), a First Edition of The Hidden Church of the Holy Graal (1909), with an autograph letter, from Waite to the original owner, a first edition of The Pictorial Key to the Tarot (1911), inscribed by Waite to Elizabeth Severn a fellow member of Waite’s Independent and Rectified Rite of the Golden Dawn, and copy Number 12 of a limited edition of 250 signed copies of the handsomely-bound Strange Houses of Sleep (1906). Also extremely scarce is a bound volume complete run (eleven issues) of Waite’s short-lived occult journal: The Unknown World (1894-1895) “A Magazine Devoted To The Occult Sciences, Magic, Mystical Philosophy, Alchemy, Hermetic Archaeology, And The Hidden Problems Of Science, Literature, Speculation And History.”

Books from Waite’s own library include a copy of La Rénovation Religieuse (1901) inscribed to Waite by the author, Abbé Joseph-Alphonse Petit; a copy of the Bibliothèque Rosicrucienne edition of Adumbratio Kabbalae Christianae (1899) with A. E. Waite’s scattered pencil notes, and a remarkable association copy of “Leo Taxil’s” Le Diable au XIXe siècle ou, les Mystères du Spiritisme. Le France-Maconnerie Luciferienne (24 Parts in “2 Volumes” – bound in 1, 1892-1895) used by Waite when writing his Devil-Worship in France and with his pencil notes throughout. Another extraordinary book is a copy of George Wyld’s Theosophy, or Spiritual Dynamics and the Divine and Miraculous Man (1894), bound in full brown crushed morocco, and inscribed on the flyleaf from Waite to the great love of his life, Dora Stuart-Menteath. Rare privately printed works include a typescript Address to Neophytes (circa 1910) from Waite’s Independent and Rectified Rite of the Golden Dawn, and two documents relating to Waite’s Fellowship of the Rosy Cross: The First Order of the Rosy Cross (1916) and Questioning of the Neophyte Grade (circa 1916-1917). Manuscript items comprise draft reviews of two books (later published in “The Occult Review” in 1922) and a handwritten reader’s report – presumably prepared for a publisher – on an unidentified work on the Zohar (1927).

Please note that while we will attempt to mark items that are sold as soon as possible, technical reasons dictate that there may be some delays with this particular catalogue.

As usual we have a variety of other catalogs in preparation. At this point we don’t know the sequence, but we are currently working on catalogues with topics including: Mythology, Rosaleen Norton, Theosophy, Grimoires, Alchemy and Hermetica, Astrology, and other of our specialties, with a few surprises along the way. Of course we will also continue to regularly issue our Aleister Crowley and “Miscellany” catalogs.

The books in these catalogs represent just a minute fraction of our overall holdings. We currently list nearly 10,000 other occult and related titles on our main website: 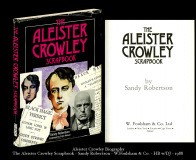