D G Mattichak jr’s latest book A Comment on the Verses of the Book of the Law reveals the secrets of the magick of Aleister Crowley’s Thelema for the first time after over a century.

The work of Aleister Crowley (1875-1947), the self-styled Great Beast 666, is well known even outside the circles of students of occultism and has often been misunderstood and misrepresented. In the Book of the Law Crowley left the greatest magickal enigma of the last century, the key to the order & value of the English Qabalah which remained unknown even to Crowley himself until its discovery in 1983. Although there have been numerous attempts at solving this puzzle all have failed until now to meet the stringent criteria outlined in the Book of the Law that sets the genuine key apart.

A Comment on the Verses of the Book of the Law will be of interest to all students of magick and to Thelemites everywhere. It can be purchased from the publishers Rose Dog Books at http://rosedogbooks-store.stores.yahoo.net/coonveofboof.html or from Amazon at http://www.amazon.com/Comment-Verses-Book-Law/dp/1434984141/ref=sr_1_2?ie=UTF8&s=books&qid=1309856452&sr=1-2. 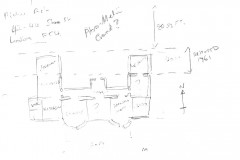