AMeTh Lodge Journal Vol I No 1

AMeTh Lodge Journal Vol I No 1

We are pleased to announce the publication of AMeTh Lodge Journal.

This 132-page large format journal printed in full colour is written and produced by members of AMeTh Lodge, London – a chartered body of the O.T.O. This is the first issue of an annual publication dedicated to esoteric studies and Thelema. Combining high production values, original artwork, thought-provoking essays and innovative rituals, AMeTh Lodge Journal constitutes a welcome addition to the range of esoteric publications produced by actual practitioners of magick.

More information can be found on the Lodge’s website: www.ameth.org.uk
SYNOPSES OF THE ARTICLES

BLACK TO THE BLIND
A very personal, moving and partially described experiential insight into the mystery of the great South Asian goddess Kali that challenges perhaps dated but persistent notions there is an apparent dichotomy between the Eastern and Western religious and mystical traditions when it comes to the ultimate nature of the Spirit. The challenge is made on the basis of personal gnosis and a new syncretic paradigm emerging from “…occult and initiatory currents, subtly preparing the Western world for the assimilation of the mysteries of the East.” It will be of particular interest and inspiration to those with an interest in exploring the similarities between South Asian tantricism and the Western magical tradition.

THE GREAT GOD PAN
A study drawing on both historical and contemporary examples of expressions of the pervasive and ecstatic mysteries of the Great God Pan in art, literature, music, mysticism and magic that sees those mysteries as having the potential for initiation into, and mystical experience of, the totality of reality. In this vision of Pan, the realisation in one’s own experience of the full glory of Nature in both its positive and negative manifestations is identified with the highest initiation. Crowley saw it that way and also identified the experience with “the Mystery of Selflessness”. The vision of Pan is described as one with the Knowledge and Conversation with the Holy Guardian Angel and articulated within the conceptual framework of Thelemic cosmogony.

THE BRAZEN HEAD
An informative and entertaining reprint from ‘The Magical Link’:
“This is an extract from Crowley’s unpublished diary for January 12, 1923, 10 p.m. Crowley alludes to this work with the spirit Belial in his manuscript notes to his copy of the Goetia. In it he takes credit for restoring Belial to his normal complement of 80 servitors! Crowley spelt Belial BLIAL, but the usual OT Hebrew form is BLIOL, lit. ‘wickedness’. Belial was credited with much wickedness in the OT, including ‘inciting worship of foreign gods,’ and ‘abuse of Yahweh’s sanctuary by female drunkenness.’ Uh-oh! See ‘Dictionary of Deities and Demons in the Bible’ (Leiden & New York: Brill, 1995). This ritual features what appears to be a very early (and very funny) use of electronics in the service of spiritual pursuits.” Hymenaeus Beta, ‘The Magical Link’, Autumn 1995 e.v.

SACRED HOSPITALITY
This article explores the history and significance of sacred hospitality looking for commonalities across a wide range of cultures. Drawing on comparisons and contrasts in attitudes, behaviours and customs, both traditional and contemporary, the focus is on the possibilities and benefits of the practice of sacred hospitality and engaging in Feasts as an aspect of a spiritual path, a form of karma yoga. This approach is examined specifically in the practical context of the membership of a busy Lodge of a Thelemic Order embedded in the wider community and life of present day urban London.

ANCESTRAL VOICES PROPHESYING WAR: Obsessed by Bartzabel?!
A detailed and fascinating study looking to use ‘Liber 325’, ‘The Bartzabel Working’, as a template for the creation of a ritual along similar lines for an evocation of Hismael, the Spirit of Jupiter. In the absence of further evocation rituals for planetary spirits written by Crowley, we are forced to go back to first principles and try to understand why Crowley wrote ‘The Bartzabel Working’ in the way in which he did. This essay highlights some of the key theoretical ‘problems’ that were addressed whilst creating the Hismael ritual. The resulting ritual for the Spirit of Jupiter is also included in the journal.

PYRAMID OF INITIATION: The Sacred Geometry of the Outer College
In this analysis, we are invited to explore the possiblity of whether the builders of the Adytum or Holy of Holies, where the real initiation takes place, could use the five lower sephiroth of the Tree of Life as the cornerstones of the Pyramid of Initiation and form a ‘scaffolding’ for the Outer College. ‘Liber Tau’ is taken as the basis for the calculation of the measurements, ratio and angles of the ideal structure. Looking at it from this perspective could help us to use the sephiroth in a much more architectural way, seeing them as a specific pattern of sacred geometry.

AN OFFICER AND A GENTLEMAN
This is a short article putting forward the proposition that all Officers of a local body OTO should be of at least Second Degree as below that degree within the Order, you are at best a child from an initiatory and magical perspective. The author contends that at this level, within the magical context of the local body, one is ill equipped, and shouldn’t be expected or required to take on the responsibilities of an Officer.

CAKRAS, SEPHIROTH AND CELESTIAL SPHERES
This is a short selective review of the history of various attributions of the cakras to the planets and sephiroth of the tree of life in different magical, yogic and New Age systems, looking to encourage and inspire further thought and research that could be best tested in the fires of one’s own mystical and magical practice and experience.

‘NOT’, NEGATION, ALEPH AND ABSOLUTE ZERO: The Empty Silence Out of Which Everything Comes.
An essay based on an analytical meditation inspired by a result of ritual bibliomancy on the ideas of negation, nothing, no-being and absolute zero. The nature of the initiation apparently so stupendous that came upon Crowley while meditating during his Magical Retirement on Oesopus Island following the Amalantrah Working is speculatively explored in relation to one of his earliest essays, ‘Berashith’, his 0=2 formula, the Dao and a particular interpretation of the negation that is at the heart of Mahayana Buddhist ontology.

THE STELE OF REVEALING: The New Aeon and Ancient Egypt
The place and continuing significance of the Stele of Revealing as an object of far greater import to Thelema and Thelemites than it is to Egyptology is considered in depth in this timely essay. The author examines key issues surrounding translations of the Stele’s Egyptian hieroglyphics, the relationship between the Stele and the Egyptian Book of the Dead and the artistic techniques, materials and tools available to Ankh-f-n-Khonsu. At a time when the security and future of the Stele in the Egyptian Museum is giving cause for concern to those with a close interest, the essay concludes with recommendations for further action and research in connection with the search for more knowledge about this remarkable artefact.

THE HISMAEL WORKING: An Evocation of Hismael, Spirit of Jupiter
A ritual text for an evocation of Hismael, the Spirit of Jupiter, along similar lines to those in ‘Liber 325’, ‘The Bartzabel Working’. This text was created as a result of work to find a template that could be used for the development of evocation rituals for the other planetary Spirits in the tradition of the Bartzabel Working. The thought that preceded the creation of this ritual is documented in another essay in this journal, entitled: ‘Ancestral voices prophesying war: Obsessed by Bartzabel?’

RESIST THE TEMPTATION TO LIVE ENTIRELY OUT OF CANS…
A personal account and reflection of a trip by three Lodge members to the place on the outskirts of a small village not far from Glen Affric in the Scottish Highlands over four beautiful, bright, clear Autumn days in the September of 2010 for a long weekend of hill walking, ritual magic, scrying, karma yoga and fine feasting that concluded with a pilgrimage to Boleskine. The experience became a powerful reminder of how greater Liberty and much else can be achieved by a desire to exceed, excel and enjoy coupled with the willing acceptance of natural and voluntary restrictions.

PURIFICATORY RITE OF ABADDON
This Purificatory Rite of Abaddon was used during preparations for the Bartzabel Working, an Evocation of the Spirit of Mars, conducted by members of AMeTh Lodge in March 2009 e.v. The general structure of this rite is based on a Vajradhaka Fire Puja, one of the preliminary practices of Highest Yoga Tantra in the Tibetan Buddhist tradition. Abaddon or “The Destroyer” from the Apocalypse becomes the wrathful deity acting as a means for the purification of practitioners’ negativities in this innovative ritual adapted for those following the Western magical tradition.

‘ZEN AND THE ART OF MOTORCYCLE MAINTENANCE’: A Personal Perspective
This is a candid look from a personal and Thelemic perspective at a book that has been a major life influence for many. The reviewer read the book in the late 80s. Pirzig’s classic was fundamental to bringing him back to the path he started out on in his teens and played a big part in the finding of Thelema and the O.T.O. 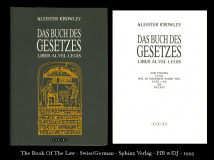