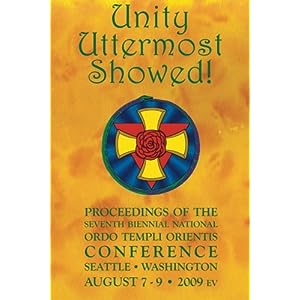 “Unity Uttermost Showed!” offers a selection of papers from the seventh biennial National Ordo Templi Orientis Conference (NOTOCON) of the United States Grand Lodge of O. T. O., held in the Valley of Seattle, Washington, in 2009 EV. The papers cover diverse topics including Enochian magick, sacrifice in Aztec mythology, the sacred geometry of an astral cathedral, producing ritual theater, personal responsibility in magick, promulgation of the Law of Thelema, textual analysis of “The Book of the Law,” and more. Other highlights include the original ritual “The Feast of Babalon” and the address given by U.S. National Grand Master Sabazius. They represent some of best modern practical and scholarly work on Ordo Templi Orientis, Thelema, and the magick of Aleister Crowley.