Amazon have updated their description of the new volume from Wordsworth. My thanks to joe93 for the heads-up… 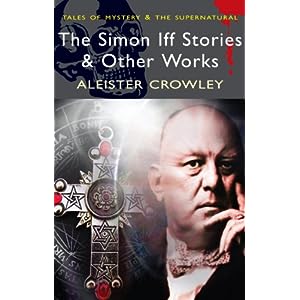 This volume brings together two series of short fiction by the poet, writer and religious philosopher Aleister Crowley (1875-1947).

It includes the first complete publication of Simple Simon, the detective series featuring Crowley’s most memorable fictional creation, the mystic-magician-philosopher-psychoanalyst-detective Simon Iff. The idealised Crowley in old age, Simon Iff is wise, knowing and unfailingly humorous as he applied psychoanalysis, Taoism and his own religious philosophy of Thelema to divine the depths of human nature and solve a wide array of crimes and mysteries.

The six Scrutinies of Simon Iff stories are set in France and England, anchored by Iff’s beloved Hemlock Club.

The twelve Simon Iff in America stories afford Crowley’s penetrating insights into America as he found it during his residence from 1914 to 1919.

The two Simon Iff Psychoanalyst stories were among the earliest tales to use the new science of psychoanalysis to solve mysteries.

Also included is Crowley’s other major short fiction series, the eight stories of his legendary Golden Twigs, which were inspired by Sir J.G. Frazer’s encyclopedic study of myth and religion in history, The Golden Bough.
The book will be published in March 2012.