“Life of Aleister Crowley Comes to the Big Screen”

In: Aleister Crowley
With: 0 Comments

This information is from Market Wire:

Life of Aleister Crowley Comes to the Big Screen

Sorcerer’s Adventures Chronicled in “Aleister Crowley: Revolt of the Magicians”

Michael Schrager of The Dominion Entertainment Group and Patricia Baker of The Big Picture Agency LLC have teamed to bring “Aleister Crowley: Revolt of the Magicians,” the spellbinding screenplay based on the life of Aleister Crowley, to the big screen. The screenplay of the occult world’s most controversial figure is written by internationally renown occult author and Crowley expert, Lon DuQuette, and Jim Bratkowsky of Cinemagic.

“Lon and Jim have done a terrific job of capturing the essence and adventures of Aleister,” says Schrager. “Crowley led a hedonistic lifestyle in Victorian London while passionately seeking spiritual truth in the occult. He was ultimately catapulted to the top of the occult world. ”

Crowley’s character was enhanced by the company he kept — Bram Stoker, William Butler Yeats and actress Florence Farr, to name a few. Aleister is also listed as one of the “Top 100 Brits,” sandwiched between Robert Bruce and Henry V, however, newspapers of the time called him ‘the wickedest man in the world.’

“Interest in the paranormal remains high,” states Baker. “This story offers rich, transformational roles for actors, and will captivate movie-goers around the world.”

Aleister was born into a family of Plymouth Brethren, a strict Christian sect in Leamington Spa, England. During his 72 earthly years, (1875 – 1947), he indelibly imprinted himself on the Western Magickal Tradition and to many, he was the Western Magickal Tradition. “Choosing which part of his life story to tell was the most challenging part of this project. The more you read about Aleister the more you want to know,” says Schrager.

“Aleister’s legacy attracts many new converts to the Occult even today,” explains Baker, “and he is said to still command considerable loyalty even from beyond the grave.” Some believe Aleister was a spiritual seeker, others argue he was the dark magician. Production is planned for late 2004 in England and the United States. 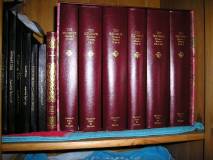