Regular visitors will recall that lashtal.com has previously posted items about a movie, “Aleister!”

I removed references to the movie after seeing the “Producer’s” highly, er, “personal” website on Yahoo, and as a result of the failure of him (“C P Spencer”) to reply to the following questions I raised on 15 February 2004: “Your AOL Personal Homepage link still doesn’t work: “Sorry, We Can’t Find That Page”. Your MZRE Unicow links also fail for “Aleister II”, “Satan And The Saint”, “Distribution”, “Submissions”, “Coming Soon” and “Trailers”. Perhaps unsurprisingly, your PayPal links appear to work fine! I know I’ve asked before, but I don’t recall receiving an answer: since the movie was first mentioned on this site on 4 October 2002 has it received any published reviews? Has it been submitted anywhere for review?”

Today my concerns appear to have been confirmed by an email received from a member of this site:

i love the site….thank-you!
2 months ago i sent a money order for the unicow “aleister” dvd.
was informed that they had recieved payment, dvd on the way.
2 weeks later no dvd. i emailed and they were having manufacturing problems…but said they would ship/mail asap.
anyways has been a month since then. subsequent email inquries have gone unanswered.
maybe you could post this/ inform fellow lashtal community that it might be a risk to purchase anything from unicow.

“Unicow Productions” is best avoided for the time being, I suspect… 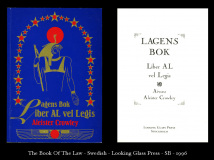