The Joy of Sects

In a significant and fascinating article, The Times (8 May 2004) discusses the impact of the Golden Dawn. Crowley, Yeats, Seamus Heaney, Jimmy Page, David Bowie and an appeal for the preservation of the only remaining Golden Dawn Temple building all feature. Thanks to imbas for providing the text… From The Times

The Joy of Sects

Let’s all make a religion

Weary of Christianity, a group of Victorians created their own cult, with repercussions to this day — just ask David Bowie.

It doesn’t look much: a workaday bit of inner London, complete with greasy spoon on the ground floor, and launderette next door. Yet this humble Victorian terrace is, in its own way, one of the most significant addresses in Europe. Why? Because a hundred years ago, No 36 Blythe Road, Hammersmith, was the headquarters of a strange Victorian sect known as the “Golden Dawn”, a sect which, though it may be virtually unknown today, arguably transformed Western religious belief.

To find out the how and why, we have to go further back, to the 1880s, when Europe’s intellectuals were beset with doubt and anomie. On the one side was monolithic Christianity, smugly resistant to change. On the other was the scientific world of Darwin and the factory owners, reducing man to monkey — or machine. Neither option, neither pole, seemed remotely appealing to impatient spiritual thinkers of the day. It was time to beat a new path to “personal fulfilment”.

How to do this? The Freemasons had already tried. It was the Masons who originally conceived the idea of a tightly knit religious-intellectual sect, existing within yet apart from mainstream society. Then there was Eliphas Levi. In the mid-19th-century this failed French priest wrote tracts of magical instruction drawing heavily upon the medieval Jewish tradition of the kabbalah. Finally, there were the theosophists and the Rosicrucians. The first were giddy idealists who hoped to unite all faiths in one single creed, patched with modern science, the second were Franco-German snobs who saw a mystical underlay beneath the dreary pieties of Biblical Christianity.

The genius of the Dawn’s British founders — a solicitor, an antiquarian, a few like-minded friends — was to cheerily synthesise all of this disparate religious freethinking, and much else, into one new pseudo-religion. To help, they had some texts of “recently discovered” ritual magic. Once all that was in place, the order was ready for recruits. In 1888 Mina Bergson, sister of the philosopher Henri Bergson, became one of the first initiates into the new Hermetic Order of the Golden Dawn.

That a woman was in the vanguard is highly significant: and is one of the principal ways that the Golden Dawn changed modern spirituality. Previously, all Western religions, even the Masons, had been rigidly patriarchal. By contrast, the Dawn’s feminised belief-system (ancient goddesses featured heavily in Golden Dawn liturgy) meant that women were at least as valued as men. A revolutionary change.

The initiation that Bergson underwent in the first Golden Dawn Temple (in the grounds of today’s Horniman Museum in South London) gives a flavour of the Dawn’s curious and eclectic ways. The temple walls were richly adorned with kabbalah symbols and Egyptian hieroglyphs. In the middle was an empty coffin, a cuboid altar, and a table decked with chalice, knife, and scourge. In the smoky shadows, red-robed priests and priestesses patrolled about the room, chanting the Dawn’s weird new prayers as they went.

Nutty? Maybe, but here is another great inheritance of the Dawn: the idea that, religiously, you can just do it yourself. Before the Golden Dawn, religious rituals were revered because they were old and unchanged, at least in theory. By contrast, the Dawn were the punk rockers of spirituality, happy to pick and mix bits of the old, and to add new stuff of their own. They cared only that it felt and looked right. Many modern religious pioneers, particularly New Age thinkers, are indebted to the Golden Dawn for this bold and poetic synthesis.

The exotic Dawn rituals were obviously alluring: membership expanded swiftly. Many came straight from the ranks of the bourgeoisie: others were more bohemian or aristocratic — such as Constance Wilde, Oscar’s wife, or Algernon Blackwood, the famous ghost story writer. And then there was W B Yeats. In 1890 the great Irish poet was initiated in the Dawn’s second temple at Fitzroy Street, London W1. Why? As Yeats later wrote in his metaphysical study, A Vision: “Some (members of the Dawn) were looking for spiritual happiness or for some form of unknown power, but I had a practical object. I wished for a system of thought that would leave my imagination free to create as it chose and yet make all that it created, or could create, part of the one history, and that the soul’s.”

This is another Dawn inheritance. Music and literature have benefited greatly from the Dawn’s idea of fusing a personal religion with artistic intuition. Poetry has been especially touched: the Dawn-esque symbolism of Yeats informs Ted Hughes, and much Seamus Heaney and John Berryman. Less predictably, pop and rock have also been influenced: David Bowie was a huge fan of the Dawn in the 1970s; Led Zeppelin’s Jimmy Page was another. Through these famous artists the Dawn’s odd, poignant mysticism touches other musicians to this day.

The last major influence of the Dawn is its extracurricular pursuits. When the members of the Dawn weren’t conducting strange, smoky rituals in their coffin-filled basements, they liked to experiment with travelling the astral plane, or doing spirit invocations, or testing the powers of meditation, Oriental magic, and Tarot. In all these exploits the Dawn was charting new ground: such things had been dismissed through the Victorian era, even fiercely abjured. Without the Dawn ’s interest they might have disappeared altogether. Ergo, anybody who turns a Tarot card today, anybody into reiki, wicca, crystal therapy, or lucid dreaming (inter alia), should pay homage to Yeats and the Dawn, for guarding and nurturing the esoteric flame.

The order’s end came when Aleister Crowley joined in 1898. This Cambridge-educated son of evangelical Plymouth Brethren took the studious occultism of the Golden Dawn by storm. He learnt the texts in record time; he gibed at the genteel games of “Enochian chess”; he dabbled with sex magic, Satanism and drugs (a more dubious innovation: Crowley must have been one of the first heroin addicts).

The cerebral founders of the Dawn were not impressed; the scene was set for schism. The final act came at 11am on April 19, 1900, when Crowley attempted to seize control of the last and most important Golden Dawn temple — the Blythe Road building. Dressed in a kilt, dagger, and “black mask of Osiris”, Crowley crept down the suburban road from Olympia and bamboozled his way into the sacred vaults. He was eventually ejected by Yeats — alongside a presumably bemused local constable. The temple was duly saved, yet the order broke up soon after.

This bizarrely picturesque final act might be reason enough to blue-plaque No 36 Blythe Road. But, more importantly, it has recently been established that Blythe Road is the last major Golden Dawn temple still standing. All the others have been blitzed away or demolished. One of the most important, Cleveland Street in Fitzrovia, was levelled just a few weeks ago. This leaves Blythe Road as the only site that truly commemorates the Dawn, the only place with real links to this kooky, gallant, funny, half-mad, half-inspired group of like-minded young Victorians. A small group which, in its strange and subtle way, managed to change our world for ever. 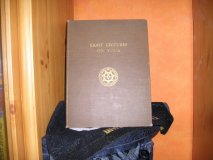