In a fascinating article on the BBC News site, Jimmy Page’s enthusiasm for the work of the Gothic architect and designer William Burges is examined in detail…
From the BBC site: 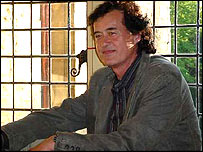 Former Led Zeppelin guitarist Jimmy Page has paid a visit to one of Wales’ most famous landmarks after a 31-year wait.
Page was invited to Cardiff Castle after his contribution to a new book about the architect William Burges, who transformed the castle’s interior.

A fan of the Victorian architect’s work, Page lives in the house which Burges designed for himself in London and allowed it to be featured in a new book on Burges.

Page paid his last visit to the castle more than 30 years ago when his band played in the city, but he was not allowed inside.

“We were staying in the Angel Hotel and it was tantalisingly close, but they were doing it up or something at the time and I couldn’t get in.” 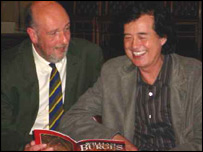 Page added that his love for Burges’ work began as a teenager.

“I had an interest going back to my teens in the pre-Raphaelite movement and the architecture of Burges,” he said.

“What a wonderful world to discover.”

In 1972, he bought Burges’ London residence, The Tower House, which carries the architect’s trademark attention to detail.

“I was still finding things 20 years after being there – a little beetle on the wall or something like that,” Page said.

“It’s Burges’ attention to detail that is so fascinating.”

Tower House is the only property designed by Burges which is currently not open to the public.

But after hearing a request from Cardiff castle curator Matthew Williams, Page allowed pictures of his home to be featured in the new book, called William Burges, written by Mr Williams.

“If you have the privilege of living in a house like this and find someone else who is just as passionate about it, of course you want to help,” said Page.

Mr Williams said he wanted to write a book about Burges’ work and was thrilled when Page allowed him to photograph rooms of Tower House.

“The book took about eight months to complete and a lot of research went into it as well as trying to get pictures of his work,” Mr Williams added.

“Jimmy Page was very good and let us into his home to take pictures, and it is really nice to see those pictures in the book because Tower House isn’t open to the public.

“The last book on Burges was written 23 years ago and it was quite an in-depth book, so I wanted to create a book which would be a lot more accessible to people.”

The reputation of William Burges (1827-1881) rests on his extravagant designs and his contribution to the Gothic revival in architecture in the nineteenth century.

As well as Cardiff Castle and Tower House, Burges designed the lavish interior of Castell Coch, on the outskirts of Cardiff.