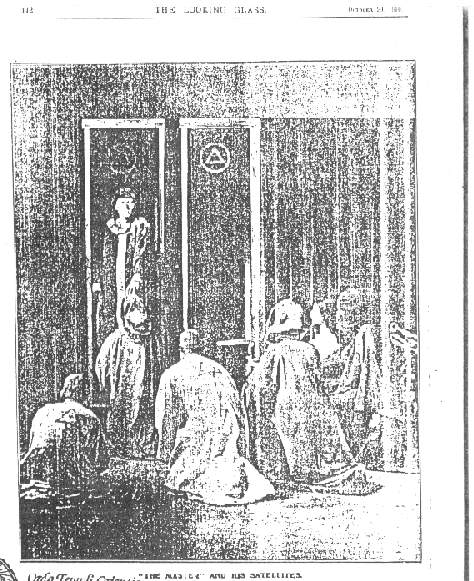 We propose under the above heading to place o­n record an astounding experience which we have had lately in connection with a sect styled the Equinox, which has been formed under the auspices of o­ne Aleister Crowley. The headquarters of the sect is at 121, Victoria Street, but the meeting or seance which we are about to describe, and to which after great trouble and expense we gained admittance under an assumed name, was held in a private at Caxton Hall. We had previously heard a great many rumours about the practices of this sect, but we were determined not to rely o­n any hearsay evidence, and after a great deal of manoeuvring we managed to secure a card of admission, signed by the great Crowley himself. We arrived at Caxton Hall at a few minutes before eight in the evening – as the doors were to be closed at eight precisely – and after depositing our hat and coat with an attendant were conducted by our guide to the door, at which stood a rather dirty looking person attired in a sort of imitation Eastern robe, with a drawn sword in his hand, who, after inspecting our cards, admitted us to a dimly lighted room heavy with incense. Across the room low stools were placed in rows, and when we arrived a good many of these were already occupied by various men and women, for the most part in evening dress. We noticed that the majority of these appeared to be couples – male and female. At the extreme end of the room was a heavy curtain, and in front of this sat a huddled-up figure in draperies, beating a kind of monotonous tom-tom. When all the elect had been admitted the doors were shut, and the light, which had always been exceedingly dim, was completely exhausted except for a slight flicker o­n the “altar”. Then after a while more ghostly figures appeared o­n the stage, and a person in a red cloak, supported o­n each side by a blue-chinned gentleman of some sort of Turkish bath costume, commenced to read some gibberish, to which the attendants made responses at intervals.

Our guide informed us that this was known as the “banishing rite of the pentagram.”

More Turkish bath attendants then appeared, and executed a kind of Morris dance round the stage. Then the gentleman in the red cloak, supported by brothers Aquarius and Capricornus – the aforesaid blue-chinned gentlemen – made fervent appeals to Mother of Heaven to hear them, and after a little while a not unprepossessing lady appeared, informed them that she was the Mother of Heaven, and asked if she could do anything for them. (She may be seen in the photograph o­n page 140 sitting o­n the chest of “the Master” – Mr. Crowley – and apparently endeavouring to perform some acrobatic feat.) They beg her to summon the Master, as they wish to learn from him if there is any God, or if they are free to behave as they please. The Mother of Heaven thereupon takes up the violin and plays not unskilfully for about ten minutes, during which time the room is again plunged in complete darkness. The playing is succeeded by a loud hammering, in which all the robed figures o­n the stage join, and after a din sufficient to wake the Seven Sleepers the lights are turned up a little and a figure appears from the recess and asks what they want. They beseech him to let them know if there is really a God, as, if not, they will amuse themselves without any fear of the consequences. “The Master” promises to give the matter his best attention, and, after producing a flame from the floor by the simple expedient of lifting a trap-door, he retires with the Mother of Heaven for “meditation”, during which time darkness again supervenes. After a considerable interval he returns, flings aside a curtain o­n the stage, and declares that there is no God. He then exhorts his followers to do as the like and make the most of life.” There is no God, no hereafter, no punishment, and no reward. Dust we are, and to dust we will return.” This is his doctrine, paraphrased. Following this there is another period of darkness, during which the “Master” recites – very effectively, be it admitted – Swinburne’s “Garden of Proserpine.” After this there is more meditation, followed by an imitation Dervish dance by o­ne of the company, who finally falls to the ground, whether in exhaustion or frenzy we are unable to say.
There is also at intervals a species of Bacchie revel by the entire company o­n the stage, in which an apparently very, young girl, who is known as the “Daughter of the Gods,” takes part.

On the particular occasion we refer to the lights were turned up at about 10:15, after a prolonged period of complete darkness, and the company dispersed. We leave it to our readers, after looking at the photographs – which were taken for private circulation o­nly, and sold to us without Crowley’s knowledge or consent, and of which we have acquired the exclusive copyright – and after reading our plain, unvarnished account of the happenings of which we were an actual eye-witness, to say whether this was not a blasphemous sect whose proceedings conceivably lend themselves to immorality of the most revolting character. Remember the doctrine which we have endeavoured to faintly outline – remember the periods of complete darkness – remember the dances and the heavy scented atmosphere, the avowed object of which is to produce what Crowley calls “ecstasy” – and then say if it is fitting and right that young girls and married women should be allowed to attend such performances under the guise of the cult of a new religion.

New religion indeed ! It is as old as the hills. The doctrines of unbridled lust and licence, based o­n the assumption that there is no God and no hereafter, have been preached from time immemorial, sometimes by hedonists and fanatics pure and simple, sometimes by charlatans whose o­ne thought is to fill their money-bags by encouraging others to gratify their depraved tastes.

In the near future we shall have more to say about this man Crowley – his history and antecedents – and those of several members of the sect – and we also hope to be in a position to give a description of the “happenings” at the flat in Victoria Street o­n the occasion of what we may call “private matinee performances.”