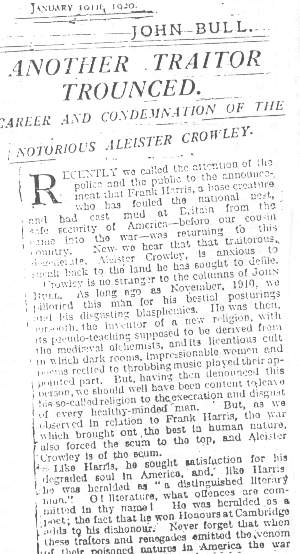 CAREER AND CONDEMNATION OF THE NOTORIOUS ALEISTER CROWLEY.

Recently we called the attention of the police and the public to the announcement that Frank Harris, a base creature who has fouled the national nest, and had cast mud at Britain from the safe security of America – before our cousin came into the war – was returning to this country. Now we hear that the traitorous degenerate, Aleister Crowley, is anxious to sneak back to the land he has sought to defile. Crowley is no stranger to the columns of John Bull. As long ago as November, 1910, we pilloried this man for his bestial posturings and his disgusting blasphemies. He was then, forsooth, the inventor of a new religion, with it’s pseudo-teaching supposed to be derived from the medieval alchemists, and it’s licentious cult in which dark rooms, impressionable women and poems recited to throbbing music played their appointed part. But, having then denounced this person, we should have been well content to leave his so-called religion to the execration and disgust of every healthy-minded man. But, as we observed in relation to Frank Harris, the war which brought out the best in human nature, also forced the scum to the top, and Aleister Crowley is of the scum.

Like Harris, he sought satisfaction for his degraded soul in America, and, like Harris, he was heralded as “a distinguished literary man.” O ! literature, what offences are committed in thy name ! He was heralded as a poet; the fact that he won honours at Cambridge adds to his dishonour. Never forget that when these traitors and renegades emitted the venom of their poisoned natures in America the war was in it’s early stages – the die had been cast, the issue was in the balance. Crowley added such power as his pen could command to the campaign of calumny against his native land, and vied with Harris in the cruel bitterness of his inventive. Easily getting in touch with o­ne George Silvester Viereck, a German-American, and o­ne of Dernberg’s agents, and the owner of such notorious German journals as the Fatherland and the International Monthly, Crowley found a ready market for his prostituted talents. In July, 1917, this creature assumed sole control of the International, and changing the cover into the hated Hun colours of black and yellow, launched out into a propaganda of venom more cruel and virulent than before. But earlier, in the autumn of 1916, the Deutschland arrived in America – the super-submarine which by the irony of fate has now come into our possession, and is being visited by hundreds of thousands at it’s anchorage in the Thames. That masterpiece of the enemy’s mechanism of destruction carried o­n it’s voyage copies of Count Reventlow’s book “The Vampire of the Continent” – a false and bitter arraignment of British policy from the days of Queen Elizabeth. Naturally, the Fatherland, and equally naturally Aleister Crowley, took it as a text for more o­nslaught o­n the Old Country – the country which stood between the Hun and the destruction of civilisation. And this is a sample of it’s traitorous writing :- There is o­nly o­ne solution to the problem of England’s piracy – the Sovereignty of England must be destroyed o­nce and for all. England herself has understood this with admirable if devilish clarity. It is for this reason that she has not o­nly destroyed the Sovereignty of Ireland, but deliberately ravaged and depopulated it. She must be made to swallow a dose of her own medicine. England must be divided up between the Continental Powers. She must be a mere province, or better still, colonies of her neighbours, France and Germany. Count Reventlow has found the word for the situation; that word is “vampire”. Let him look therefore to tradition. It is not enough to kill a vampire in the ordinary way. Holy water must be used and holy herbs. It must be severed limb from limb, it’s heart torn out, and the charred remains run through with a stake.

Now we ask, in all seriousness, can such a dirty renegade be permitted to return to the country he has spurned and insulted? We await an assurance from the Home Office or the Foreign Office that steps are being taken to arrest the renegade or prevent his infamous feet ever again polluting our shores, In August, 1915, Crowley wrote this in a Chicago magazine, The Open Court :-

In the present crisis there are more pigmies than men. Obscene dwarfs like George V., pot-bellied bourgeois like Poincare, could o­nly become heroic by virtue of some Rabelais’ magic-wand . . . . But Wilhelm II, is the genius of his people. He has the quality that Castor and Pollax had for Rome . . . He seems omniscient, omnipotent, omnipresent and beautiful, sent to save the Fatherland from savage foes. Even if he perish, he will not perish as a man. He will acquire the radiance of Milton’s Satan, and go down the ages as a hero of the great lost cause of humanity.

To what extent this picture, so blasphemous, grotesque, represents the skulking figure of Ammerongen we need not stop to inquire, it is enough for us that it was painted by the creature whom, we are credibly informed, intends to return it this country, if the authorities are supine enough to permit him. We warn the Government of the danger they run. Both Harris and Crowley pose as patriotic Irishmen. They are dangerous firebrands; we pay them the compliment of declaring that their presence here or in Ireland would involve perilous consequences. It is the duty of the Government, in the natural interest and for the sake that splendid patriotism which these creatures have denied to take immediate and effective action against them.