Extract of some sort.

Not long ago the death of Percival Hughes, a brilliant  young English poet, occurred as the result of devil-worshipping ceremonies which he had been persuaded to take part in by the notorious Aleister Crowley, head  of the English “Satanists.” Who calls himself “The Beast.” The death took place in Crowley’s “Abbey” in Italy, and young Hughes’ wife, Katherine, managed to  escape. She gave information which led to the Italian authorities closing up Crowley’s vicious colony.

One thing the Berlin police are trying to find out is whether Crowley or some  of his followers are behind “The Ace of Spades.” 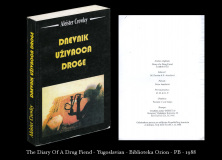