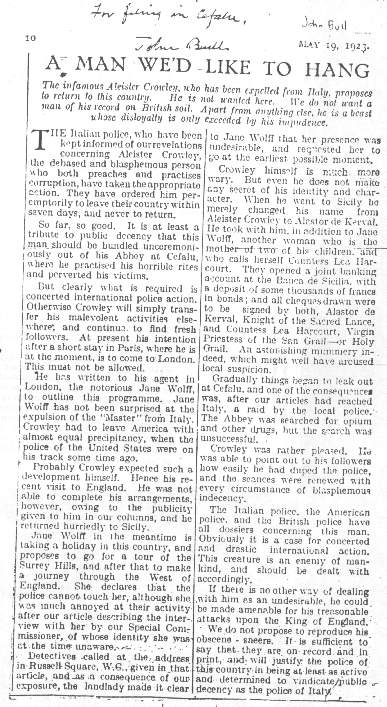 The Wickedest Man In The World

In our last two issues we have published a series of charges against a man named Aleister Crowley, who from a safe retreat on the shores of Sicily spreads a contaminating influence that has already brought to ruin more than one young life. The more the activities of this degenerate Englishman are investigated, the more incredible becomes the tales of his villainies. It is understood that the Italian Government are resolved to put an end to Crowley’s career of vice, and in this effort they will have the sympathy of decent-thinking people in every land.

Our past exposures of Crowley have been, to say the least of them, highly sensational, but they are as nothing compared to these we have yet to make concerning the amazing record of this degenerate poet and occultist, traitor, drug fiend, and Master of Black Magic, his knowledge and practise of which are amply proven by his writings and by the evidence of those who have come into contact with him. He may well be described as the Wickedest Man in the World.

We are impelled by the sheer horror and gravity of his recent devilries to make further exposures concerning what is going on in his Lust Temple at Cefalu, Sicily, to which he is seeking to lure a number of unsuspecting students from Oxford and Cambridge Universities – both men and women – under the pretence of studying occult science and the mysteries of the Cabbala. Already, one eminent Cambridge professor – whose identity is known to us – has arranged to join Crowley at Cefalu next month for this purpose, and is now working with a well-known titled scientist in South Africa, who is, we are informed, conducting a Lodge or “Study Circle” in Bloemfontien, of the Cabalistic Order, of which Crowley is the Past, if not the Present, Grand Master.

Our revelations of the sinister circumstances leading to the recent death of a brilliant young Oxford graduate at Crowley’s so-called “Abbey,” in Cefalu, first brought to light the existence there of little children, all between five and seven years of age, who are living there with the Beast and his abandoned acolytes under conditions that defy description.

These unhappy children – two boys and a girl – are said to be half starved and have already been taught by “The Beast” to indulge in the vilest practises, while they are made to witness sexual debaucheries that are too disgusting to describe. Tow are children of one of the female drug fiends who are living with Crowley in his “Abbey,” one of them by her former husband, and the other by Crowley, who is the father also of the third child by some other of his countless women victims.

The nature of these can be barely hinted at, but one – to the facts of which we have two independent eye-witnesses of it’s performance on two separate occasions – has to do with the violation of a naked woman in front of the “altar,” and her subsequent slaying and “sacrifice” of a goat, which is made to play a principal part in these disgusting Dionysian rites.

The woman, who acts as the “Virgin Goddess” or priestess in this vile ceremony, is first given an aphrodisaical drug, such as hashish (known in the East as Vhang”) or another similar drug distilled from Indian hemp, known in scientific circles as “Anhalonium Lewine.”
This renders the debauchee capable of participating in practices which no normal person could conceive of, much less describe.

We understand that, aroused by our exposures, the Italian Government is determined to clean out this plague-spot of crime at Cefalu, and bring Crowley to justice for his illegal traffic in noxious drugs.

There are, however, other “activities” at the Abbey which admit of more detailed accusation. one of these is the method employed by Crowley of paying his numerous debts on the island, by sending out his women as “hostages” to those who are willing to accept this despicable method of payment.

We shall not hesitate to hand to the authorities the names of some of these distinguished visitors, together with further sworn testimony if, as we anticipate, a certain official on the Island endeavours to stifle Government investigations.

Suffice to say for the moment, that one of Crowley’s women in the “Abbey” is shortly expecting another child to be born, the father of which is known to be a prominent banker in Palermo, who is a friend of the British Consul.

We may mention that, up to the time of this article going to press – no death certificate has been received by the relatives of the young Oxford graduate who died under such suspicious circumstances at the Abbey four weeks ago, nor has any reply been received from the British Consul at Palermo to the anxious inquiries made by the young man’s mother and sister concerning his death.

Another of the women inmates of the Abbey has borne two children by Crowley, both of whom are now dead. This woman was living with him when he had his London Lust Temple in the Fulham Road, to which he enticed a number of young women whom he induced to indulge in various forms of unnatural vice while under the influence of drugs which he had administered first to them. Since our publication of the particulars of his abominable attack upon the life and sanity of one of our informants, we have received information which shows that he has deliberately driven other women mad who had come under his influence. one of these died on Holloway Jail while serving a term for being found in possession of the drugs with which Crowley had supplied her, while another – the Hon. Mrs. K., died in an asylum.

Unless the authorities act quickly Crowley will succeed in luring others to hi den of infamy. This must be prevented at all costs.