The “Paris Midi,” a somewhat sensational evening paper, publishes an article concerning a certain supposed English nobleman, whose name, does not appear in Debrett. Pending further inquiries the story is given under the strictest reserves. According to the “Paris Midi,” the Englishman in question, who is stated to have a Paris address, is threatened with expulsion from the country on the ground that he has been acting as a secret service agent for Germany. The paper describes him as a celebrated citizen and a great traveller. At present he is lying ill in Paris. He declares that his fiancée, a Nicaraguan lady, and his secretary, an American, have been conducted to the frontier.

The paper alleges that he admits having acted for Germany in the United States during the war, but in complete agreement with the Naval Intelligence Service, and that he succeeded in counteracting by his influence the formidable German organisation which was acting there. He represented himself to the Germans, and in particular to Count von Bernsdorff, the Ambassador, as an Irish revolutionary, and, in order that this might be believed, published articles against Britain in the “Vaterland” suggesting, among other things, that Great Britain ought to become a German colony and that Britain was doing her best to obtain the maximum profit from the war at the expense of France.

TO FORCE AMERICA INTO WAR.

His aim, he is alleged to have informed the “Paris Midi,” was to obtain the sinking of neutral vessels by German submarines in order that America might be obliged to enter the war. He declared that he acted in agreement with the head of the American Intelligence Service, to whom he is alleged to have declared that he had just written for a letter, which would clear him in the eyes of the French Government.

The Englishman is alleged to have lived in France for 26 years, and uninterruptedly for the past six. He is stated to have declared that no new fact had been produced against him, but that his reputation as a magician has probably something to do with an alleged desire to expose him.

The “Paris Midi” says the date fixed for the expulsion is tomorrow. – Reuters. 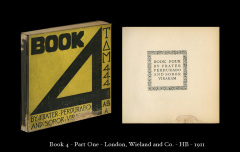