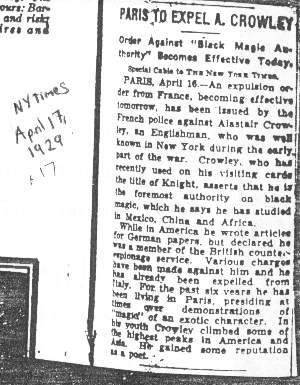 An expulsion order from France, becoming effective tomorrow, has been issued by the French police against Aleister Crowley, an Englishman, who was well known in New York during the early part of the war. Crowley, who has recently used on his visiting cards the title of Knight, asserts that he is the foremost authority on black magic, which he says he has studied in Mexico, China and Africa.

While in America he wrote articles for German papers, but declared he was a member of the British counter-espionage service. Various charges have been made against him and he has already been expelled from Italy. For the past six years he has been living in Paris, presiding at times over demonstrations of “magic” of an exotic character. In his youth Crowley climbed some of the highest peaks in America and Asia. He gained some reputation as a poet.