DEFENCE OF A MYSTIC.

Mr. P. R. Stephenson has written “a study of the documentary evidence relating to a campaign of personal vilification unparalleled in literary history,” being a defence of Aleister Crowley, the poet and mystic, and the book has been issued by the Mandrake Press at 2s 6d.

Crowley is an Englishman, educated at Malvern and Cambridge, entered the diplomatic service, and became in turn explorer, poet, magician, and a deep student of the occult. He has written much in poetry and prose, on eastern and exotic subjects. Some of his writings are only for students who, like himself, are interested in the mysteries of eastern religions. Some of his poetry the critics do not profess to be able to understand fully, thought they acknowledge his ability and power. All of which goes to show that in certain exclusive circles Crowley is a name to conjure with.

But a certain daily newspaper and a weekly periodical have conducted for some years a campaign against the character of Aleister Crowley. The weekly periodical referred to contains a bitter attack on him in the current issue. Whether these attacks have the slightest influence on the friends and followers of Crowley is open to question. Those who do not know Crowley, but have read the attacks and are willing to be fair, should read this defence. Those who neither know nor care anything about Crowley or the newspapers which attack his character will, of course, leave the whole thing alone. 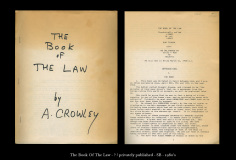