“I thought that everything that was vicious and bad had been produced at one time or another before me,” said Mr. Justice Swift, “but I have learned in this case that you can always learn something more if you live long enough. Never have I heard such dreadful, horrible, blasphemous, abominable stuff as that which has been produced by the man who describes himself to you as the greatest living poet.”

The name of the poet was Aleister Crowley – otherwise known as “the worst man in the world,” “Beast 666,” “the Chief magus to the Great Spirit Taphtharthararth” – and the man who went bust for twopence in the pound in April 1939.

He died last week. I went to the funeral.

It was at the crematorium at Brighton at half-past two; a raw, dank day, with the leaves wet and muddy on the ground. Five minutes before the appointed time I went inside the chapel – a cold hostile place with a few memorial plaques screwed to the walls, and significant empty spaces left below them by thrifty relatives who think they may be needed later on.

To my left were a youth and a girl, a good looking young couple, whom I judged to be Italian.

To the right were about a dozen people – an odd mixture of crumpled raincoats, coughs, bright scarves, a lack of haircuts and the indefinable spoor of Charlotte Street and Soho.

At a quarter to three there was a crunching on the gravel outside, the door opened and the coffin arrived.

Crowley, this strange old man, this dubious artist in necromantic mumbo jumbo, who had founded an iniquitous Abbey in Sicily, had been expelled from France, banned in England and entangled in a series of ferocious and disreputable lawsuits, had come to the end of the road.

An elderly man stepped up to what passes for a pulpit in a crematorium. He had three books. He opened the first and in a deep, loud voice of considerable eloquence, began to read “A Hymn To Pan.”

It was wild pagan stuff contrasting grotesquely with the faint, non-conformist piety of the draughty chapel with it’s three small and cautious crosses engraved upon the walls –

In one lunatic sweep Beast 666 hurls over the principles of right and wrong. “Do what thou wilt !” – a free pass to robbery, bigamy, embezzlement, rape, arson, barratry, larceny, murder, conspiracy and all the rest of the ample resources of the calendar of crime.

After twenty more formidable minutes the orator was silent and sat down. A little woman scurried forward and threw a spray of roses on the coffin. The rollers moved. The little furnace doors opened and the coffin, slightly askew, began to push it’s way past the black velvet curtain covering the hole in the wall. 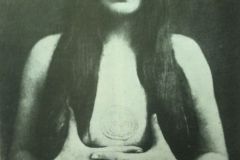