Aleister Crowley always hoped the ornate naming conventions and special editions of his books would create rarity, value and – for an occultist often strapped for cash – valuable income.

And his plan appeared to be paying handsome dividends as the auctioneer’s gavel came down at Bonham’s on a sale of books and letters which easily outstripped their expected price.

One of the items on offer was a manifesto which quoted and summed up the law of Thelema – “do what thou wilt”.

A collection of letters from Crowley to the conjurer Chris Van Bern, a personal friend, fetched 4,830 – over £1,000 more than the expected sale price.

Also snapped up were two first-edition books, including Magick in Theory and Practice, were were sold for £517 and £437 respectively.

A spokeswoman for London-based Bonham’s said: “The sale attracted a lot of interest. It went really well.”

The letters had been bought by a dealer from Oxfordshire, the auctioneer’s official said.

For Crowley, every aspect of his books – their size, format, cover, price and decoration – had a symbolic significance.

As he wrote in 1928: “My scheme from the first was to create complexity and rarity.”

Magick in Theory and Practice, published in 1930, was the result of a 16-year gestation. Crowley had intended to publish it at latest by Spring equinox of 1929 “in view of certain facts of a magical character.”

However, Crowley’s infamy in the English press, which had led to a persistent smear campaign, meant the timetable was never kept.

Eventually, frustrated by the reluctance of UK printers to touch his work, Crowley managed – with financial backing from a disciple – to get 3,000 copies of the book published in Paris.

Wrangling over the bill with the Parisian print firm Lecram meant the stock of unbound books was eventually published by the Mandrake Press in 1930.

Crowley – who even chose the paper for the wrappers of the first runs of Magick in Theory in Practice – would surely have been amused by the fact a book he battled to publish was now a sought-after speciality at a famous auction house.

But alas for the Great Beast, he was not around to spend the proceeds on the traditional spoils of fine brandy and cigars! 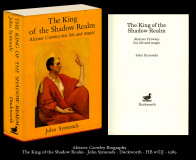