FORGET what your bible tells you. The number of the Beast isn’t 666 – it’s 30 Clarendon Square, Leamington Spa.

That was the Warwickshire birthplace and early home of the notorious Satanist and world’s wickedest man, Aleister Crowley.

It was also the sight where he discovered sex and sin.

Now the devil’s den is up for sale. But, priced pounds 349,950, is the Midland pad hellishly expensive or a beast of a bargain? There certainly should be plenty of interest in the luxury two bedroom apartment.

Even John Lennon was an admirer, making sure Crowley was on the cover of the Sgt Pepper’s Lonely Hearts Club Band album.

However, one person who isn’t a devotee of the self-proclaimed ally of Satan is Dawn Compton, a landscape gardener – and resident of number 30.

“I’ve never even heard of Aleister Crowley,” she says.

“But then I’ve only been here a year, and there haven’t been any Satanists popping in for coffee!

“It’s not a spooky house at all, it’s actually rather nice.

“Any troubles we have don’t come from demons or hauntings, just boy racers outside, or people staggering out of the local nightclub.”

Now having heard of Crowley, Dawn is intrigued. “Was he a bad bloke like Fred West?” she asks. “I hope there aren’t any bodies underneath my patio.

“I certainly won’t be doing any more landscape gardening out front.”

Crowley was no Fred West.

Born into a rich and devout Christian family in 1875, Crowley rebelled against the suffocating moral conventions of his day to join a magical sect called The Hermetic Order Of The Golden Dawn.

But he fell out with the group’s leader, SLM Mathers, later claiming to have defeated him in a demonic duel.

Crowley then evolved his own mystical philosophy, involving sex magic.

Settling in Sicily in 1920, he set up a temple called the Abbey of Thelema, painting the words “Do What Thou Will” over the door.

In 1923 a young English poet, Percival Hughes, died from blood poisoning following his participation in a ritual at the abbey.

Crowley fled the country. He later became entangled in a British court case, with the judge declaring: “I thought that I knew of every conceivable form of wickedness. I thought that everything which was vicious and bad had been produced at one time or another before me. “I have learnt in this case that we can always learn something more if we live long enough.

“I have never heard such dreadful, horrible, blasphemous and abominable stuff as that which has been produced by the man Crowley.”

Newspapers of the day labelled him “the wickedest man in the world”.

Even Crowley got into the spirit of things, proclaiming himself ‘To Mega Therion’, which, translated from the Greek, meant The Great Beast.

However, his voracious appetite and range of interests didn’t just encompass magic.

He also wrote poetry and pornography and was a champion chess player and talented mountaineer, conquering many peaks never before scaled.

The Satanist died destitute and a heroin addict in Hastings on December 1, 1947, at the age of 72.

His last words were: “Sometimes I hate myself.”

Although Crowley left Leamington aged five, the genteel Midlands town left an indelible influence on the villainous gent. His love of ritual originated from his christening in the family home, while his interest in sex came to prominence in Leamington when two female friends of his mother called.

The young boy ducked under their skirts to ogle their legs.

Such tepid treats couldn’t have tantalised Crowley for ever Lucifer would always trump Leamington, a tranquil town of gliding perambulators and genteel propriety.

The Great Beast was not a man of this place, or his own time.

Instead he was a rude belch in the middle of an Edwardian tea party, the ugly crust cut from a cucumber sandwich.

These days the town of Leamington has all but forgotten Crowley, with no plaque or statue to commemorate the infamous figure.

However, Dawn Compton says she will certainly find out more about this mysterious man, who entered the world close to where her coffee table now stands.

“My partner’s got a few Led Zeppelin albums,” she says. “Maybe he knows more about Aleister Crowley than I do. I’ll have to ask him.”

But before she does, there is landscape gardening work to finish.

Clearly the traces of magic, mystery and madness that this house once held have now evaporated for ever. 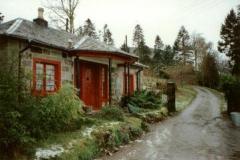