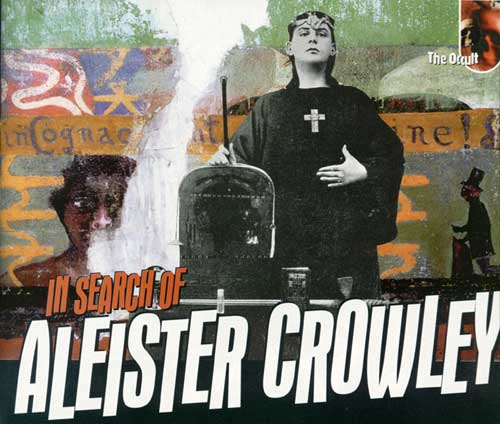 Fifty years after his death, the mention of Aleister Crowley’s name can still evoke strong reactions. Some people believe he was an evil Satanist while others dismiss him as a pompous fraud. Aron Paramour visits the Abbey of Thelema, founded by Crowley to preach the Thelemic Laws, and uncovers hidden paintings which reveal the true personality of this self-styled Wanderer of the Waste. He struck a note in everyone who knew of him, from horror to ridicule, and then to admiration of his outrageous activities. What were these activities which so incensed people? Crowley was bisexual with a huge sex drive, enjoying homosexual liaisons as much as heterosexual ones. He experimented with every drug he could lay his hands on and was able to control all of them except heroin, originally prescribed for his asthma, he soon became addicted to it and towards the end of his life he was taking single doses large enough to kill a roomful of people. Crowley explored the unconscious, specifically through magick, studying ancient manuscripts and modernising them in his encyclopedic work, The Equinox.

Crowley had a black sense of humour that shocked and outraged people encouraging an already vindictive and sensationalist press, who dubbed him “The Wickedest Man in the World.” He certainly didn’t deny it: “I’m one hell of a holy guru!” he once wrote. Crowley broke mountaineering records and traveled extensively. More importantly, however, he believed himself to be a new messiah on a divine mission to spread The Law of Thelema.

Edward Alexander Crowley was born in Leamington on 12th October 1875, and was brought up among the stifling morals of the Victorian era. This was made much worse by his parents’ dedication to the sect of the Plymouth Brethren, who believed that everything in the Bible should be taken literally, even to the extent that fossils in the ground had been put there by Satan in order to trick people into disbelieving Genesis.

The Commune Of Thelema

After his father died the young Aleister rebelled, and began to see through what he considered to be the hypocrisy of society and it’s Christian morals. His mother called him “the little beast” and well-versed as he was in the Bible, he took it to mean the Beast of the Revelations – represented by the numerals 666 – and gleefully adopted his new title as a defiant joke.

At the height of his power and belief in the Law of Thelema in 1920, Crowley and his small group of followers founded The Abbey of Thelema in a farmhouse in Cefalu, Sicily. He chose Cefalu after consulting the Yi King, a Chinese form of divination. Any doubts his followers had were dispersed on arrival: it seemed perfect for their purpose which was to establish a commune and practice the religion of Thelema as free men and women.

At this point, we should consider what they were trying to achieve within the context of the period, which was already being called “the age of impotence.” Much of Crowley’s doctrine advocates personal freedom and liberation. Of course, in 1920 this attitude was far ahead of it’s time, but Crowley later became an icon in the more understanding 60’s; eternally embossed on the Beatles Sgt. Pepper album cover. The Search For The Temple

No one has explored the Abbey since the film maker Kenneth Anger in 1955, who uncovered paintings beneath the white washed walls and took up the floor to reveal symbols used in magickal workings (I use the “k” as Crowley stipulated, to differentiate occult magick from stage magick”.

Almost all of the photographs which Anger took of the paintings were published in black and white and therefore lost all their impact.

I journeyed to Sicily in March 1996 to find the Temple. Much of the town remains exactly as it was Crowley’s day, shops selling fresh bread, olives and wine from narrow alleyways, washing is hung out using shared lines attached to opposite houses and many of the attitudes and beliefs have not changed. Stories about the abbey were rife: I was told the police had hermetically sealed the house with wax to keep the evil spirits in and to placate the locals; that immediate arrest would follow if I went near to it and the insanity had befallen individuals who had spent a night within its walls.

I met with some young locals one evening in The Black Cat bar who had a huge desire to learn the truth of a legend and offered to help me. They took me to the Abbey and as we turned a corner into the concrete car park of a football stadium situated between modern housing blocks, I saw the terra-cotta tiles of a roof partially hidden by trees.

To avoid prying eyes I returned in the evening equipped with water, a camera and note book. I climbed through the undergrowth, negotiating a steep bank covered with vicious brambles and twisting roots. My worst fear was that the house would be boarded up or bolted. Instead, I literally stumbled to face the back entrance of the villa, the door of which lay smashed to pieces amongst a layer of tiles from a partly collapsed roof. Sweat poured down my face, my shirt was drenched in the evening heat and butterflies fluttered in my stomach as I entered the house. The villa has often been described by biographers as an unsanitary hovel. This is simply not true for as I passed through room after room the sheer size of the place surprised me. In my imagination it had consisted of two or three rooms and two corridors. As for being unsanitary, half of the houses in Sicily at the time had no bathroom or toilet. As I stood in the doorway, directly in front of me lay the kitchen, with modern fittings built in by the people who stayed after Crowley in the 60’s and 70’s.

Evidence of this period is scattered all around the villa in the form of broken chairs, discarded clothes, steel bed frames, even an ancient TV. Something strange struck me about the kitchen in particular. Doubling as a dining room it had an open bottle of wine with glasses on a carefully laid table, plates were piled on the drawing board and aged clothes were still waiting to be removed from the washing machine. Everything was completely intact as if someone had gone for a long walk and never returned.

The house had been redecorated in a style typical of the period with gaudy wallpaper and dull colours. In the hallway, crumbling layers of plaster exposed the original bright reds beneath. The shutters in many of the rooms were drawn and nailed down, and the darkness of the villa was a sharp contrast to the merciless sun outside. As I passed from room to room I had to use my torch. Exhilaration shot through my veins as I entered the final room: upon every wall obscured by a layer of blue-tinged white wash I was able to make out paintings of faces, strange designs and symbols.

Over the course of my stay, I spent every day removing the white wash from the wall using cotton wool and a mist spray to gently rinse away the water based layer, painstakingly bringing out the oil based work beneath. The task was grueling in the hideous closeness of the heat but immensely rewarding. It was very strange to get so close to the work of this man, seeing the minutest detail every brush stroke he had made. The art on the walls was bold and garish. Although maligned at the time, Crowley’s paintings have recently been held up as ahead of its day. One reason for this appears to be his lack of ego in connection with the work. When criticised, he once replied with a shrug, “I grasp the essence.” This is rather different from his overblown attitude towards the rest of his work, especially his poetry. He once declared, “I am the world’s greatest living poet.” The bright colours which the work emanates is probably due to the fact that he was sniffing ethyl oxide, which was previously used as an anesthetic. Inhalation causes colours to brighten and visions can occur if it is taken in excess. This lends a strong psychedelic fell to the paintings. The majority of the work which is steeped in occult symbolism centres around his bedroom and was designed to induce nightmares. The pornographic element, including humans copulating with goats and dogs, was (oddly) to promote a healthy attitude towards sex amidst the straight-jacket values of the Victorian era when it was believed that sex was evil and masturbation caused mental illness. During my stay I was fortunate enough to be introduced to a man whose grandfather had known Crowley when he first arrived in Cefalu. Crowley had fallen in love with his grandfather’s beautiful house, tucked away in the hills just north of the town centre. He desperately wanted to buy or rent it in order to found the Abbey of Thelema, but the offer was turned down and Crowley had to choose the smaller farmhouse.

This man stressed over and over how huge the impact Crowley and his followers had made on Cefalu at the time. He was a free man, something they had never encountered before.

I was told of the relationship between Crowley and Monsignor Campo, the Director of the School of Archbishops, a religious training school which is still situated near to the ancient Cathedral. Campo was an original thinker who had studies the unorthodox work of the Dutch philosopher Kant. Given his position, he trod a thin line with the church. Crowley and Campo had many in-depth conversations concerning religion and Philosophy.

To this day, Monsignor Campo’s diaries are banned from public view. The man I spoke to has tried to access them, in the interests of literature, to study Campo’s subversive views and find any references to the conversations he had with Crowley, but without success.

Much speculation exists as to why Crowley was expelled from Sicily. It has been suggested that he fell foul of a facist purge on all occult and secret societies; that Mussolini had a general dislike of Crowley and even that his followers were spying for the British Government, with the Abbey as a cover. Although the Archbishop of Cefalu disliked Monsignor Campo he tolerated him, however, he hated Crowley because of his public display of free thinking, and so instigated the expulsion of the Thelemites. The Scottish journalist in Cefalu was not only working for the British press but was also in the pay of the Archbishop, who commissioned him to write outrageous lies to stir unrest in Britain and to get the attention of Mussolini. Under pressure to keep the huge power of the church as an ally, Mussolini sent spies to gather information about the Thelemites’ scandalous activities to secure an expulsion order. However, they returned from the Abbey and said nothing was going on. Still being badgered by the Archbishop, it was not the answer Mussolini needed. Calling the spies stupid, he secured the order anyway. When it was served, Crowley argues that it was for him only and not his followers. Mussolini angrily issued another order and Crowley lost his beloved Abbey in May 1923.

Before he died in 1947, Aleister Crowley wrote that his stay at the Abbey of Thelema was definitely one of the happiest times of his life. Footnote : “If anybody would be interested in financing or producing a documentary film about uncovering the still-hidden paintings of Thelema before they crumble away with the sands of time, please contact, Aron Paramour c/o Uri Geller’s Encounters.