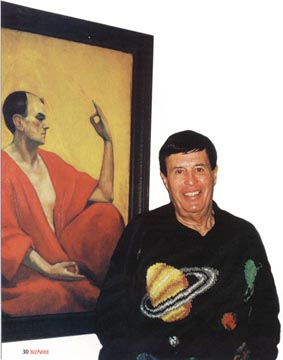 Magician’s apprentice Mark Pilkington on the celluloid sorcery and psychedelic Satanism of the 1960’s baddest boy.

From the light of the projector emerges a darkness that is hard to shake. Acid-drenched imagery fills the screen: a hanged man kicks and shudders as the life leaves his body; naked, face hidden in shadow, a man draws a knife across his heart; a top-hatted trickster tokes from a skull-shaped pipe; a deranged, psychedelic sorcerer swirls, scream and waves his arms around; a cloaked and horned figure presides over shots of Hells Angels, cavorting hippies and Mick Jagger performing in Hyde Park. Kaleidoscopic swirls, occult symbols and tattoos flit across the screen throughout, subliminal in intent. The only sound is a slow Moog pulse, provided by Jagger himself. Welcome to the world of Kenneth Anger: occultist, underground film-maker and unofficial custodian of Hollywood’s secret life. The images above are from Invocation of My Demon Brother, released in August 1969. Anger says it portrays “the shadowing forth of Our Lord Lucifer” – the light bringer, appropriately enough for a film maker. Whatever this celluloid ritual manifested, it certainly brought all the bad things with it.

Anger was drawn to the dark side at an early age. As an artist and homosexual growing up in 1940’s America he immediately identified with outsiders, developing a fascination in all that was hidden from view. Before lonig he found himself a mentor: the notorious English occultist and decadent Aleister Crowley. In 1955 he travelled to Cefalu, Sicily, with the infamously unorthodox sexologist Alfred Kinsey, where they were the first to uncover murals at Crowley’s Abbey of Thelema.

In the late 1960’s, Anger descended on a still-swinging London with his knowledge of all things arcane, he soon found himself installed as the Stones’ Satanic Majesty and in darker moments, takes credit for bringing about their double bummer of 1969. He once famously freaked out Keith Richards and Anita Pallenberg by painting the inside of their front door gold – while he was supposedly out of the building – in accordance with plans for a pagan wedding ceremony that ultimately never took place.

Anger has never been a prolific film maker, and is equally celebrated for his infamous Hollywood Babylon books. These photo documentaries chart Tinseltowns seamier episodes in all their fallen glory. Murder, rape, suicide and scandal are all covered with gloating gusto. With two volumes under his belt, Anger is sittng on a third until some of those featured are no longer able to take legal action. It’s said to include sizzilingly sensational scoops.

What of Anger today? Well, a film about Crowley’s paintings, A Man We’d Like To Hang, is in the offing. “I don’t want to make films for the typical American teenager, who’s a moron.” says the still fiery 70-something director. And if anyone’s got a cool $20 million to spare, Anger’s ready to shoot his own script about Crowley’s time at Cefalu.

Scorpio Rising (1963)
Denim and leather-clad bikers flirt with death, fascism and each other to a rock’n’roll soundtrack in this ground-breaking proto music video. Kicked up a moral dust storm on its release.

Invocation of My Demon Brother (1969)
Anger’s darkest hour – though only 11 minutes long. Apocalypse at the end of an era.

Lucifer Rising (1980)
A spellbinding Crowleyian religious epic, heralding the death of the old generation and the birth of the new. Anger’s last completed work.

Kenneth Anger’s Magick Lantern Cycle, including the above films, is available from BFI Video.