[The following was originally published in “Thelema Lodge Calendar”…] Readers of this Journal will be familiar with the life of the man behind the headlines. Crowley’s “autohagiography”, augmented by his assorted minor autobiographical writings (“The World’s Tragedy”, the diaries, etc.), provides more than enough detail for most. One would have thought that the writing of a biography would be less than problematical, not just because of Crowley’s own efforts at autobiography, but also because his was a life lived in the public domain: few contemporary individuals wrote of themselves so voluminously or had their movements recorded by the press in such detail. However, though many have tried, the “ultimate” biography has always been out of reach. Symonds, of course, has presented and re-presented his life of Crowley in numerous editions, and with ever increasing detail. The latest, and presumably final, edition (“The Beast 666”), provides a staggering amount of information, including more than one would necessarily choose to read about the man’s toilet habits. Unfortunately, to every anecdote, every incident, is applied a negative slant, a reason to dismiss, insult or belittle. One never feels close to the Aleister Crowley that inspired others to give up everything to follow him, or indeed to the facilitator of a new aeon. Others have tried, of course, often apparently without real authority or justification: Israel Regardie, Charles Cammell, Francis King, Gerald Suster, Colin Wilson, Daniel Mannix, and the rest. Few seem to come anywhere near to providing a balanced, detailed biography with any sort of mass appeal. Is this, “A Magick Life”, then, the exceptional biography for which Thelemites and the public have waited? The book, which appeared without fanfare, is beautifully produced in hardback, securely bound, and is typeset with admirable clarity. It is equipped with a concise but helpful bibliography and an extensive index. The dust jacket illustration is striking, though it appears to lack acknowledgement of Fuller’s contribution. There are thirty-eight black and white illustrations, ranging from the over-familiar to the fascinating; included, as example of the latter, are photographs of Crowley playing chess and a modern photograph of Crowley’s place of birth (30 Clarendon Square, Leamington Spa). Where the illustrations are of familiar subjects, Booth has typically sought out the unexpected; for example, one of the pictures of Boleskine is circa 1905, and the portrait of Mathers will be unfamiliar to many. Germer’s Gestapo arrest warrant is shown. Given Crowley’s increasing status as an artist, though, his own graphical works are perhaps under- represented: just the usual self-portrait, the sketch of Mudd, and a cartoon scribble. There is an unfortunate confusion in the labelling of Victor Neuburg and Leila Waddell. The Acknowledgements are extensive and display the depth of research undertaken by Booth. Hymenaeus Beta is singled-out for extended and effusive praise and gratitude, to the extent that many readers will view this as an “approved” biography. Booth, to good effect, rattles through the “influences of The Beast” material in the introduction, rather than considering it the book’s peak, as is the case in many other biographies. Many of the subjects of his “influence” comprise the usual suspects (The Beatles, Kenneth Anger, Jimmy Page, Bowie, etc.); however, some are less predictable, including the Ballet Rambert. Crowley’s early years are efficiently presented, and the book includes a most impressive, succinct summary of the development of the Golden Dawn. The extensive material on Crowley’s time at Boleskine House is testament to the author’s stay there last year, resulting in his inclusion of the estate’s current owners in the Acknowledgements. Crowley’s travels around the world are presented in enthusiastic detail, and the anecdotes really come alive in this book. Crowley is presented in context and comes across as a realistic character, not just the subject of a biography. Rose Crowley, too, is presented sympathetically; she is certainly more fairly represented in this than in any other biography of the man. Their relationship is discussed in detail and to their mutual benefit. Other highlights in the book are lengthy sections on Cefalu and on Crowley’s involvement with military intelligence. It’s in the detail that this book weaves its spell. The inclusion of Crowley’s Chinese passport, the loathsome Tom Driberg selling one of Crowley’s diaries to Jimmy Page, Crowley’s refusal to be blackmailed by the junk media of his day. There are, perhaps inevitably, errors: “Alexandra” is described, yet again, as obscene, and proof-reading in one section results in Alostrael being renamed Alostrad, like some consumer-electronic version of a Scarlet Woman. What of the biographer, then? Martin Booth was born in Lancashire in 1944, was educated in Hong Kong, and became a teacher, novelist and poet. He operated and owned The Sceptre Press from 1969 until 1981 and its archives are now held at the University of New Hampshire, containing letters from Jean Overton Fuller (303 of them), Timothy d’Arch Smith (6), John Symonds (2), and Gerald Yorke (34). An acclaimed novelist, Booth is the author of “Hiroshima Joe” and “Adrift in the Oceans of Mercy”. His “Opium, A History” was especially well received. His previous biographical work includes that of Jim Corbett, the famous tiger hunter turned conservationist. He also, of course, edited Crowley’s “Selected Poems”. Not terribly well, as it turned out, the volume lacking bibliographic detail. So, to conclude: Is this the publicly accessible, detailed biography Crowley deserves? Possibly not. We’ll have to wait until next month for Lawrence Sutin’s long-awaited “Do What Thou Wilt”. However, any student of Crowley’s life, either the serious researcher or the casual reader, would be well served by this biography. For those anxious to gain the fullest picture, a combination of this book, “The Confessions” and Symonds’ “The Beast 666” should provide as much detail and balance as could be reasonably sought. Impressively researched, impartial, beautifully written, “A Magick Life” is a most welcome biography that stands head and shoulders above those before it, pretty much like the subject of the biography himself.
2004-11-29
Previous Post: Book 4
Next Post: “Thelema Beyond Crowley” Conference
Subscribe
Please login to comment 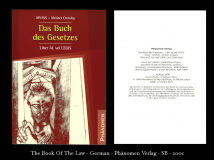