Understanding Aleister Crowley’s THOTH TAROT Lon Milo Duquette This beautifully designed book works well at communicating and serving as a gateway to the tarot cards designed by Aleister Crowley and executed by Lady Freida Harris. Called the Thoth tarot after the Egyptian god of magic, language and communication, these cards and its companion piece, “The Book of Thoth”, by Crowley, is perhaps the most sophisticated presentation of tarot one will currently find. It is, indeed, a complete representation of the magickal Universe. However, at first sight, it appears recondite, arcane and difficult to follow. Enter Lon Milo Duquette with this invaluable book. Part of the difficulty in grasping Crowley’s tarot is that it is thoroughly infused with the cosmology he spent his life expounding to the world, called Thelema. Also, The Book of Thoth reads, as Duquette said in a recent interview, “like a post-graduate treatise… it is way over the head of even very knowledgeable students.” The wealth of information to be found in “Understanding Aleister Crowley’s Thoth Tarot” (UACTT) includes extensive background material on Crowley and the Golden Dawn – the magical order whose system of tarot was the foundation for the Thoth tarot. There are also clear, concise primers on Thelema and Qabalah – the system of correspondences that is the basis of both the Golden Dawn and Thoth tarot. One of the many mysteries that Duquette clears up is how each of the small cards receives its attribution. For example, the Nine of Wands has the word “Strength” printed on its lower border. He gives a formula based on qabalistic and astrological considerations for determining the attribution. The formula is easy to understand and makes perfect sense. Other notable explanations include, the relationship between the court cards and the small cards, the unique qualities of the aces, the zodiac and planetary correspondences of the Minor Arcana and a very detailed examination of the Rose Cross found on the back of every card. One chapter covers the mystical visions Crowley wrote of in his work “Liber 418: The Vision and the Voice” and how these provided inspiration to the imagry found in some of the Major Arcana cards. Another chapter looks at the qabalistic significance of color and its effect upon these cards. One of the most fascinating aspects of UACTT is the biographical sketch of Lady Freida Harris and her relationship with Crowley. Duquette describes background details on her artistic approach and style that greatly influenced the paintings of the Thoth tarot. These cards have an energetic vitality to them that one could call psychedelic. They are alive. Duquette also had access to correspondence between Crowley and Harris that he peppers liberally throughout the book. They reveal the painstaking effort and attention to detail that went into the creation of these unique cards. It also gives the reader an inside, behind the scenes view of the process. UACTT is written in two parts. Part One has the background information while Part Two is a comprehensive description of each of the cards. There are some suggested methods of divination from The Book of Thoth, very thorough footnotes, and an excellent glossary of Thelemic, Qabalistic and Tarot terms. The book is direct and at times humorous in its writing style. It is very accessible to anyone unfamiliar with Crowley’s work though it would prove more difficult as an introduction to tarot cards. It is also a great aid and highly beneficial to the long time student and practitioner of Magick. I recommend it highly. By no means does UACTT cover everything there is to understand regarding the Thoth tarot. It acts as a doorway. The most profound insight will be from personal experience personally experienced. Duquette put it best on page 275 when he said, “ Any adept of tarot cards will tell you that if you wish to use the tarot as a divinatory tool, it is best to choose a spread and to develop a personal glossary of meanings based upon your own familiarity with the qualities and characteristics of each card and the knowledge and experience you gather in actually working with the cards.” (italics mine) This is the most important sentence in the book in this reviewer’s view. One could add that the use of the tarot may extend to spiritual diagnostics, and bardo navigation and course correction. It may also act as a communication device with unseen guides. Duquette begins UACTT with a classic invocation of Thoth. With the manifestation of this book, the invocation proves extremely successful. 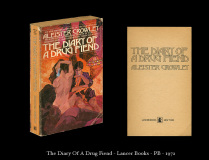