666 Sex and the OTO by Gerald Yorke

No publisher but available from Caduceus, Weiser and no doubt elsewhere.

This excellent and much neglected essay deserves a wider circulation than it has had so far. The piece originally appeared, untitled, as the introduction to De Arte Magica, Level Press, San Francisco, 1973. There it was signed Frater N.’. which, as Frater 60 points out, was a motto used by Gerald Yorke.

The essay itself is everything one could expect from Gerald Yorke. It is clear, learned, sane and decent; totally straight forward and very well written in the plainest of English. No recommedation could be too high; anyone interested in the subject would do well to read it.

I find myself at odds though with the introduction and notes. Some incorrect information about Yorke has been scraped from the internet, in particular from an incomplete (work in progress) section of the ‘Friends and Aquaintances’ area of Red Flame. The suggestion that Yorke was ‘a notorious homosexual’ occurs only in one place – a 1969 letter from Grady McMurtry. Notoriety usually hinges on more than one example. In 1928 Yorke and Israel Regardie discussed their mutual apprehension concerning Crowley’s possible homosexual intent towards them. A fear which they both confirm as unfounded. (The Eye in the Triangle. Regardie 1973). Nor is Yorke one of ‘the Royal Houses of England’. This is McMurtry again confusing Yorke with York. The present Duke of York is Prince Andrew. Non-English readers may remember him as the ex-husband of Sarah Ferguson the children’s writer and occasional TV personality. There is no connection whatsoever between the Yorkes and the Yorks.

At the end of the introduction Frater 60 tells us: “…… the present paper was no doubt penned as an attempt to satisfy the relentless queries Yorke would receive concerning the Ordo Templi Orientis and their “notorious” secret practices involving “sex magick”.” In one of Frater 60’s footnotes the piece is dated loosely as ‘written before he (Crowley that is) died.’ He can’t have it both ways. Yorke did not suffer from relentless enquiries until after Crowley’s death. I would have put the date as somewhere in between 1950 and 1955 and (on style grounds) probably intended for publication in a magazine.

Who cares anyway? If you haven’t got the 1973 De Arte Magica get this. It is on nice shiny paper and has three illustrations two of which Lashtal.com readers will already be familiar with. OK 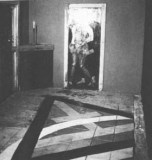