Aleister Crowley: A Passion For Evil

“What kind of magic would you like to see tonight?” booms the Beast at the start of this show: “Would you like to see Horus fly through the stalls?” The opening premise of this one man show at Edinburgh’s fringe is that Crowley has degenerated into a kind of faded vaudeville entertainer, working every night at provincial theatres for a modest fee. The Bornless One ritual is performed for provincial theatre goers like a kind of tired Hamlet. Actor and writer John Burns uses this device for the next 55 minutes to allow his Crowley to ruminate on his achievements. Sat backstage with 20 minutes until showtime, the Beast reflects with alternating melancholy but periodic bursts of energy and insight on a life besmirched by lurid newspaper coverage. Condensing any life, never mind Crowley’s into less than an hour requires some remarkably tight editing and Burns wisely chooses some key vignettes to give the broad strokes of the Crowley biography. Burns does this with remarkable intensity and effect, slipping into various characters on a minimal stage with nothing but a writing desk, a phone, a dagger and a wine glass for company (Burns plays Crowley in his 50s, balding and in bow tie and frock coat). The vignettes briefly are: the death of Crowley’s father when AC was 11; marrying Rose Kelly and the Boulak museum visit; receiving the Book of the Law; the ascent of Kanchenjunga and accompanying fatalities; Cefalu, the Abbey, and the death of daughter Nuit. These reminiscences are occasionally interrupted by the reality of the impending curtain call. At one point Crowley takes a phone call from the bank and grows infuriated by the demands for funds on the other end of the line. “Work for a living?” he blares: “Have you any idea who I am!?” The Crowley purist will have to excuse several devices inserted by Burns to progress the action and give the necessary sweep of his life. Aside from the fact that AC did not tour theatres in his last days with a hammy Vegas magician act, there is also a press conference pre-Cefalu in which an initially flattered Crowley ultimately tires of the sensationalist story lines clearly being worked up by reporters. Just when this Crowley appears to be a cynical old showman going through the motions one last time, a moment of drive and self belief returns. At one point Crowley declares he has taught men true feeling, not that imposed by organised religion: “Love is in the human heart, not in the eyes of Gods hammered out of gold”, he declares. This Crowley also underlines his claim to be a prophet: “Maybe my name will go alongside that of Christ”. Again, certainty and doubt collide in the play. Crowley muses on who wrote the book of the law – a discarnate entity (Burns does not name Aiwaz in this show), or did he (Crowley) access some higher portion of his mind (hard core Thelemites will balk at the first option no doubt). For Burns, the turning point for Crowley was, at the age of just 11, losing his beloved father. In one of the most touching sequences, Burns becomes that eleven year old, shattered with disbelief that his father, a Plymouth brethren preacher, has been taken from him by the God that Crowley senior so devoutly served. I won’t give away the ending of the play – suffice to say that this Crowley meets a rather more dramatic end than fading away in a Hastings boarding house. However, this Crowley ends his life again in last pleading conversation with the absent father. The lingering tone is that this Crowley was sent on a one man occult mission by that single childhood experience of utter desolation. Early on this AC says his sin was to “refuse to bow down”…echoes of Lucifer and “I will not serve”. Crowley has proven curiously difficult to capture in either film or literature as more than a two dimensional satanist (Denis Wheatley), a demented meglomaniac with some funny lines (Somerset Maugham’s The Magician, or the high decibel buffoon of Chemical Wedding). Burns is himself a mountaineer (Crowley is in fact the mascot of Inverness Mountaineering Club) and has set himself a remarkable peak to ascend in writing this work. In less than an hour it can only be a partial glissade across the legend of the Beast. But Burns has got higher on his one man theatre ascent than any other writer in recent years in exploring the complex psychopathology of this brilliant but conflicted man. I hope this play travels more widely; in the meantime I highly recommend making the trip to Edinburgh to catch it. *Aleister Crowley: a passion for evil can be seen at venue C (north bridge), until August 28. 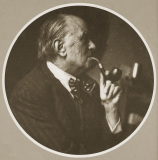