Marco Pasi: „Aleister Crowley und die Versuchung der Politik“ (Aleister Crowley and the temptation of politics), Ares Verlag, 2006, 336pp Marco Pasi is a lecturer and researcher in modern history of Hermetic philosophy and related currents (from the Enlightenment to the present) with the University of Amsterdam. He holds an MA in Philosophy from the University of Milan, and a PhD in Religious studies from the Ecole Pratique des Hautes Etudes (Sorbonne, Paris). He has focused his research mainly on the relationship between modern esotericism and politics, on the history of the idea of magic, and on methodological issues related to the study of Western esotericism. Man, this is an interesting book. But not to those who are of the opinion that there is nothing good in researching Aleister Crowley as an historical figure – and I know those exist. If you feel one should concentrate only on the magical work that Mr.Crowley initiated and focus on Thelema and how to apply it today or even think that pre-occupation with the life of the prophet equals unhealthy idol-worshipping, you better don’t read it. But in my opinion you will then miss a lot. Pasi throws a lot of light on hitherto unknown or misunderstood aspects of Crowley’s life, especially the way he tried to spread the Thelemic philosophy and bring Magick into this world – as we all should know, Magick is intended to be for All! But Aleister Crowley could be a very impatient man and so it is not very surprising that he was more than occasionally tempted by politics as the fastest vehicle to reach the homes of the people. But contrary to popular belief he did not sympathize with the different kind of vehicles he chose. This made it easier for him to switch from Fascism to Communism and back and forth again. As long as the new political leaders promised to destroy the Christian church or at least to pare back its power dramatically. The void that this destruction would leave in the people he then wanted to fill with Thelema. As we all know he was not very successful, fortunately maybe. Pasi warns the reader not to fall into the pit of believing in Crowley’s alleged admiration for fascist ideologies like so many do or find it useful to do. He divides Crowley’s „political life“ clearly into two parts: a romantic one and a pragmatic one with 1919 as the borderline date. He explains the historical contexts in which the Beast lived – believe me, post-Victorian is much too simple and I felt like I did not know very much about this era. You will hear of scientific naturalism, of the Jacobite movement, of the Celtic Revival, of Legitimationism, of various conspiracy theory based movements and what not. You can follow Mr.Crowley from pro- to anti-american, from pro- to anti-spanish, from pro- to anti-british (this back and forth again and again), from pro- to anti-fascist, from pro- to anti-communist and so on and on. It seems he always greeted a new movement with open arms until he saw its flaws. The book is divided into five parts: A well-informed biography; an overview of Crowley’s ever-changing political positions and how those are based in the cultural environment; a chapter on what Pasi calls „dangerous friendships“ with obscure political figures like J.F.C.Fuller, Tom Driberg, Walter Duranty and others; one whole chapter covers the „Boca do Inferno“ incident in Portugal and Crowley’s relationship to Pessoa and other Portuguese thinkers; the last chapter finally sheds light on how some very special political movements – namely those who are based on conspiracy theories – saw Crowley and had him observed. The whole book is most admirably foot-noted and lots of rare documents are quoted and described. Also some very rare documents from the Italian police archives as well as some correspondence between Crowley and Pessoa is presented in full (and translated) in a special documentary section at the end of the book. Plus, as a bonus, German editor Hans Thomas Hakl adds some astounding facts in an essay on Julius Evola and his relationship with Aleister Crowley. And one more extra: the pictures section of the book contain two previously unpublished shots of Aleister Crowley, one with his wife Rose Kelly. For the visual appearance and more details on the book please visit the LAShTAL Bibliographia Thelemica. This book shows in a highly academic but readable way that Aleister Crowley was so much more than the prophet of Thelema to his followers and the Wickedest Man in the World to the rest. The people he met and influenced (or was influenced by) are among the most interesting of the last century. Even his „enemies“ took him very serious, although nearly always misinterpreting him. Crowley clearly left his marks in Europe and you can’t put him away on the grounds of his political ideas or his affinity to the Nazis – Pasi shows that this is simply a legend or at least only one little puzzle-piece of many in an unbelievable life. I can recommend the book very highly and mention only one „flaw“: it is not written in the language that most members of LAShTAL.com seemingly share, but I hope an English translation will be available for the majority soon. 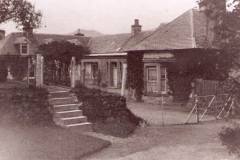