[1] The Oxford English Dictionary defines a teratoma as “[a] tumour, esp. of the gonads […]”. [2] Although the latter criticism can no longer apply, given the recent resolution. [3] Who, it has to be pointed out, sought “Light, Life, Love and Liberty” and who – contra Grant – did claim to have uttered the Word of the Aeon in a book later edited by John Symonds and (nominally) Kenneth Grant: Magick in Theory and Practice – amongst other places! [4] Particularly in Liber Aleph vel CXI. [5] e.g., he suggests, in typically ludicrous fashion, that Dee was trying to “establish subtle intercourse with the denizens of the Meon [spiders and things]”. [6] “Lam” is the subject of an untitled painting by Crowley which supposedly depicts a lama.

© 2010 The Magickal Review. All rights reserved. 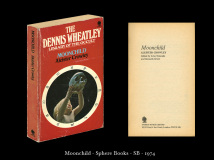