William Breeze has written an impressive obituary for Jhonn Balance, which has been circulated on Mogg Morgan’s Mandrake Speaks news list.

Read More for the text…

Jhonn Balance (aka John Balance and Geff Rushton) died at home on November 13 in a fall, leaving the music world and the wider world of magick without one of its most gifted and vivid voices.

He was born Geoffrey Laurence Burton on 16th February 1962 in Mansfield, Nottinghamshire, later adopting the Rushton surname of his stepfather, and was educated at Lord Willliams School. He studied voice and vocal technique with Saral Bohm, wife of the physicist David Bohm.

He was a member of 23 Skidoo, Psychic TV, Zos Kia, and Current 93, and in 1983 founded Coil with Throbbing Gristle cofounder Peter Christopherson.

They embarked together on one of the most enduring and fruitful art/life partnerships in music. Balance was a natural occultist from youth — he has left amusing accounts of his intensive astral experiences while still a public schoolboy. He became a serious student of all occult literature, and drew on this in his music, artfully fusing esoterics with a succession of musical forms and styles over more than two decades. The imagery and symbolism of his lyrics were however entirely his own — he never resorted to plundering the symbolic language of others, though he enjoyed occasional veiled references.

His output is all the more rich for his originality, making him a primary source in his own right, with passionate fans among occultists and pagans of all persuasions. His vocal technique was relentlessly experimental — where many singers settle on a signature style and vocal range, he continually pushed the limits of expression to find fresh outlets for his visions.

The output of Coil ranges from the avant-garde (including soundtracks for experimental filmmaker Derek Jarman), to acerbic reflections of passing trends in popular music (such as the brilliantly sardonic Love’s Secret Domain album), to experimental neoclassical and folk (as with the Solstice/Equinox series), to extended excursions into pure electronica (like the recent Musick to Play in the Dark albums). Many bands and composers have cited Coil as an influence.

Balance frequently collaborated with others, as guest artist, remixer and producer. Commissioned work by Coil includes a soundtrack for Clive Barker’s Hellraiser (rejected by the studio as too frightening), and important remixes of Nine Inch Nails (see the title sequence music for the film Seven, and the album Further Down the Spiral).

After an initial appearance in Berlin in 1983, Coil was a studio group until they premiered a sophisticated live show at London¹s Royal Festival Hall in 2000, commencing a highly successful series of tours that tested and proved Balance¹s abilities as a performer. Balance was a gifted writer whose work remains to be collected and published. A connoisseur of all things strange and beautiful, over the years he and Peter Christopherson built the important Threshold House collection of Austin Osman Spare and Aleister Crowley artworks, often loaning paintings to shows.

Balance struggled all his life with the twin diseases of depression and alcoholism — the latter contributed to his accidental death — but he drew on this pain as well as his great joy in living to produce art that was all the more true, immediate and poignantly relevant.

An account of his life and work is David Keenan, England¹s Hidden Reverse: The Secret History of the Esoteric Underground (London: SAF Publishing, 2003). A man of immense talent, learning, charm and generosity, he is survived by his ex-partner and lifelong collaborator Peter Christopherson, and his partner, the artist Ian Johnstone. 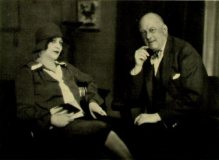