Nashville songwriter Luke Powers, who specializes in quirky takes on pop culture, has released a song about the famous album cover of the Beatles’ Sergeant Pepper’s Lonely Hearts Club Band.

Nashville, TN (PRWEB) December 14, 2004 — Luke Powers, professor-cum-songwriter whose quirky takes on pop culture and religion, have yielded popular internet songs “I Saw John Kennedy Today” and “I Shoulda Been God,” turns his sites on the Fab Four’s most fabulous album cover. His “Cover Song” is available for free download at www.phoebeclaire.com and will be included on the CD “Picture Book” to be released in 2005.

“I’m pretty sure it’s the first song written about an album cover,” Powers says. “Actually, I don’t know that for a fact, but it sounds like pretty good PR.”

The plethora of famous (and not-so-famous) faces provides much fodder for lyrics—and even a few rhymes. The song begins:

“I’m looking at the cover
of Sergeant Pepper,
crowd of famous people
standing round the Beatles:

“If you’re like me,” Powers says, “you’ve looked at that album cover hundreds of times and wondered who the hell some of these people are. Between John’s obscure footballers and George’s maharishis, it’s worse than Jeopardy.”

Powers’ lyrics duly note the album cover lore: “There’s Aleister Crowley,/Gandhi in a palm tree.” According to Beatles legend, record execs insisted that the Mahatma be airbrushed out of the picture(he was subsequently replaced by a palmtree) to prevent boycotts on the Indian subcontinent. Jesus Christ, one of John’s perennial fixations, was apparently also nixed. 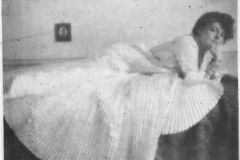