Just occasionally I find myself adding an item to LAShTAL.COM that I know really shouldn’t be here!

From the Daily Record today:

The room with Crowley’s bed always has a very strong musty smell.

Dear, oh dear… I’m not proud of publicising this sort of stuff, you know!

A HOTEL bed which belonged to devil-worshipper Aleister Crowley is to be exorcised.

The white witch who will conduct the ceremony to stop strange happenings disturbing guests says the ritual will be ‘the ultimate battle between good and evil’.

Andy Pavitt, owner of the Steadings Hotel, near Inverness, inherited the bed and other furniture belonging to the notorious Satanist from the previous owners.

They also owned nearby Boleskine House, where Crowley, who lived there early last century, claimed to have conducted an elaborate sex magic ritual which drove a housemaid mad and left the house haunted.

Kevin says he will time the 30–minute exorcism for the full moon on January 25.

He said: ‘It is almost like trying to exorcise Satan himself. Crowley has such a reputation that it will be the ultimate battle between good and evil.’

Along with Crowley’s bed, the hotel has a child’s bed, a three-piece suite and a portrait from Boleskine.

‘We had it checked for damp and there isn’t any. A couple of times we have had people saying they woke up because they felt moving or shaking.

‘My wife, Caroline, doesn’t like being in the room with the child’s bed and the picture. She says even if she puts the heating on it feels cold.’

Crowley died penniless and addicted to heroin in 1947. From the 1970s to1990s, Boleskine was owned by Led Zeppelin guitarist Jimmy Page. 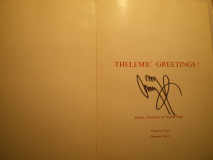