Las Vegas City Life (5 May 2005) includes a disappointing and patronising article about the Ordo Templi Orientis.

Some of the quotes attributed to the adherents are especially uninspiring:

Turned off by traditional religion, many spiritual seekers turn to paganism for their god fix

“We have minds of our own,” says Chris, a practicing pagan. “We revel in diversity.”

Dressed in a white robe, the voluptuous Chris kneels in front of the priest, solemnly stroking and kissisng his strategically placed ceremonial lance. She disappears behind a veil for a moment and is soon revealed sitting upon a four-foot-high altar, dressed in a lacy black teddy. Her legs are spread, the priest’s lance resting suggestively between them.

Clad in a Merlinesque robe, the priest then kneels in front of her, passionately caressing and nibbling at her inner thighs.

This isn’t some underground fetish club. Rather, it’s just another day at church — in this case, the Ordo Templi Orientis, a magic-practicing occult order that began 100 years ago. This symbolic sexual act — performed at the group’s temple, a converted warehouse in North Las Vegas — is one of the order’s central rites.

“It represents the sacred union between the male and female,” explains Pavel Aubuchon-Mendoza, a thoughtful-looking young man in a ponytail. “The sacred opportunity to create life.”

“We know it’s silly,” Chris admits after changing into street clothes. “We’re dressed up in silly robes and speaking Latin. You have to have a sense of humor.”

After mass, the pagans drink heartily, offering toasts of gratitude to whatever comes to mind — the ritual, their visitors, each other. Turns out they’re a friendly, unusually well-educated bunch. Many have or are working toward advanced degrees.

“[The practice] is very difficult,” says Terry Williams, the order’s lodge master and Chris’ husband. “It takes intelligence to muddle your way through it.”

A question about what drew them to paganism — loosely defined as a practice involving pre-Christian nature worship and magic — results in a solid minute of uncomfortable silence before someone answers.

“It’s a hard question to answer,” says Aubuchon-Mendoza, “because it’s so individual. It’s the idea of independent spiritualism. It provides a structure, but still lets you be introspective.” He’s one of the few pagans who agree to be identified by full name; the others fear persecution from employers, co-workers or the community at large.

The whole article can be read here: http://www.lasvegascitylife.com/articles/2005/05/05/cover_story/cover.txt 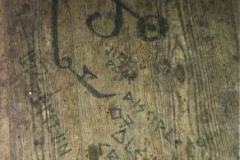