Aleister Crowley referred to Helena Petrovna Blavatsky as his “forerunner”. LAShTAL.COM member Aleisterion reports that he has uncovered evidence, in the form of an 1875 letter, of an alleged magical connection between HPB and AC…
“Do what thou wilt shall be the whole of the Law.”

It was the week of Aleister Crowley’s birth, and Madame Blavatsky was to attend a meeting of The Theosophical Society, an occult Society also in the stage of being newly born. However, the Master Serapis, a discarnate magical Entity of the Great White Brotherhood, sent the following message to Col. Olcott, insisting on postponement of the meeting owing to Madame Blavatsky. She had, the Master insisted, “a labour to perform”. This is extraordinary, given that this was the week of Crowley’s nativity. How do we know? Because the meeting postponed was rescheduled and actually held, per the Master Serapis’ instruction in the Ablanathalba Letter, the following Saturday, which was October 16th, 1875. (C.f. below)

Here is the content of the letter itself, dictated by Serapis to Olcott, in 1875:

“I pray thee, Brother mine, to take necessary steps to adjourn the meeting until Saturday [Oct 16] which will be. Sister [Blavatsky] has a labour to perform. Be friendly to the English seer, Emma [Emma Hardinge Britten, author of ART MAGIC, at whose house the Oct 16 meeting was held], for she is a noble woman and her soul hath many gems hidden within it. Begin not without our Sister [Blavatsky]. –Unto
the regions of Light I send for thee my prayer. SERAPIS”

On the reverse side of the letter, one finds a curious sentence in Latin, which closes with three words written in Greek:

Translation: “Under the pretext of justice, a strict application of law is often the gravest injury, Brother. Be gentle in manner though resolute in execution. Can such Wrath towards divine souls befit one fully adept? In the Name of Ablanathalba Semes Eilam.”

“A term similar to “Abrac[h]adabra”. It is said by C.W.King to have meant “thou art a father to us”; it reads the same from either end and was used as a charm in Egypt. Abracadabra is explained in this manner:

“The word “Abracadabra” is a later corruption of the sacred Gnostic term “Abrasax”, the latter itself being a still earlier corruption of a sacred and ancient Coptic or Egyptian word: a magic formula which meant in its symbolism “Hurt me not”, and addressed the deity in its hieroglyphics as “Father”. It was generally attached to an amulet or charm and worn as a TAT, on the breast under the garments.”

All editorial brackets Aleisterion’s. The “c” in “Abracadabra” above is in Hebrew “ch”, which Crowley interprets as a blind for “h”.

Here is the link to an explanation of the words SEMES EILAM (SEMES, shemesh, sun, and EILAM, olam, occult or hidden):

And here is a further link for a definition of the magical word Ablanathalba:

It is of note that the Master Serapis asserts that, at the time of the birth of the Prophet, Madame Blavatsky had “a labour to perform”, and the message is sealed with an ancient Gnostic Seal of Magick, central to which is a magical formula (Ablanathalba) which is everywhere identified with the Word of the New Aeon, Abrahadabra, the Word of the Prophet being born. It is then verified, this magical message which I (Frater Aleisterion) received from the Five White Brothers of ABA (and Their Head):

“Love is the law, love under will.”

aleisterion@yahoo.com
aleisterion@gmail.com
777 flaming sword in the hand of 666
One In All All In One (FraterOIAAIO)
In All One In One All (FraterIAOIOA)
“To the Stars!” 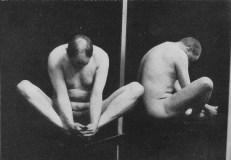