The Stranger — “Seattle’s only theater section” — recently published (March 23 to March 29 edition) a critical but gently humorous review of a performance by the Seattle OTO of The Invocation of Horus.

It was funny, painfully funny, because you had to keep a straight face. You’re not supposed to laugh in church. Even a church that commands “do what thou wilt.”

Read on for more of the text or visit http://tinyurl.com/gyfqa…
Theater News
Laughing in Church

“We’re a little nervous,” said Onyieh Jewel of the Seattle chapter of Ordo Templi Orientis. “We’ve never had the press come before. This is just an amateur performance.” As art, The Invocation of Horus was amateur in the most literal sense (from the Latin amator, or “lover of”), performed by OTO devotees at the Queen Anne Masonic Temple. “It’s ritual theater,” Jewel said. “We channel the god energy.” The god energy? “I played Isis six years ago and felt the Isis energy.” What does it feel like? Tingly? Powerful? “It’s hard to explain… it feels like… like energy.”

A photograph of the performance would give most Christians a heart attack—an incense brazier, figures in black robes and masks, swords, low lighting, chanting in strange languages, simulated incest among sibling gods—as would OTO’s history. It was largely shaped (but not founded) by “the Great Beast” himself, the relentlessly anti-Christian occultist Aleister Crowley, whose prime dictum is: “Do what thou wilt shall be the whole of the law.” (L. Ron Hubbard was a Crowley fan early in his career. Crowley, to his credit, was not a Hubbard fan. He allegedly once wrote about Hubbard and his “magickal” pal Jack Parsons: “I get fairly frantic when I contemplate the idiocy of these louts.”)

I didn’t feel any “god energy” in the room—the bio that described one actor as an amator of “long walks on the beach, hot sex, Enochian magick, and the movie Dodgeball” describes the mood nicely. As art, The Invocation of Horus was a little tedious for a story about brother killing, uncle killing, sister humping, and revenge. The gods sure had a lot to say about themselves, in grandiloquent voices. (Note to new religions—take a tip from the Bible and let crazy prophets do the talking. They eat honey and locusts, smear themselves with dung, speak in startling aphorisms, and are always more interesting than chatty deities. The more a god has to explain his special powers, the less inclined we are to believe he has any.)

The story was simple: Set, the God of Chaos, murdered his brother Osiris and cut his body into 13 pieces. Osiris’s wife (and sister) Isis had to put them back together. But where was Osiris’s phallus? Cast into the Nile, of course, where it was eaten by a fish and sat in its belly for three days. Isis had to find the dickfish, cut it open, lay it on her dead brother’s re-membered body, and hump it to conceive Horus who would kill Uncle Set and “restore the balance.” Ra, the Sun God, carried a tiny, flickering, battery-operated candle. Set scowled exaggeratedly and almost tore off his lover-sister Sekhmet’s wig by accident. One god shouted to Osiris: “Try me not, Lord of the Second Epoch!”

It was funny, painfully funny, because you had to keep a straight face. You’re not supposed to laugh in church. Even a church that commands “do what thou wilt.” 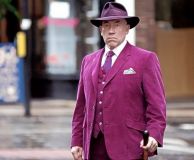