Inevitable, I suppose, that so many newspapers would use today’s date as an excuse to name-check Crowley.

For example: The Independent (UK, 06-06-06) refers to “perhaps the most notorious of all the self-ordained Antichrists was Aleister Crowley, the sex-obsessed Satanic “magus” of Leamington Spa, who was christened “The Beast” by his mother for his rebellious behaviour – and so took to the role with gusto. He died in 1947, a lonely heroin addict in a boarding house in Hastings.” 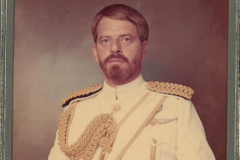