Well, the title says it all really…

According to his Blog, Gerald del Campo has resigned from the OTO after 20 years membership.

I have just been suspended from OTO myself for having had the audacity to claim that I had 20 years worth of emails and other documenst proving how badly the ball had been dropped, how people had been wronged, and even some documents that showed GL officers abusing power or involved in activities one would think was unbecoming of those positions. I have submitted notice of my resignation just now. A proper letter of resignation will be submitted to Sabazius in the next few days.

For those that don’t know the name, Gerald has been an influential Thelemite, having written two rather good books: New Aeon Magick: Thelema Without Tears and New Aeon English Qabalah Revealed. 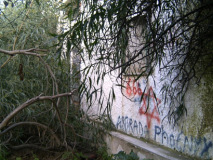