The current issue of Classic Rock/Metal Hammer: Heavy Metal Volume 3 is an impressively compiled and produced news-shelf magazine, published in the UK and sold exclusively through the W H Smith newsagents’ chain.

The whole magazine is dedicated to the influence of the occult in general, and Aleister Crowley in particular, on rock and heavy metal music.

The magazine falls prey to many of the usual cliches but it’s a cut above much of the material available these days: certainly a far more serious treatment than the ultra-respectable BBC Radio 3 managed earlier this week in its John Zorn concert introduction.

Aleister Crowley is mentioned by name on the front cover – red on black, of course – and the most significant article inside is Princes of Darkness: Aleister Crowley by Gavin Baddeley, whose other written work is likely to be familiar to many visitors…

The article discusses the inevitability of the embracing of Aleister Crowley by what is described – but not defined – as “heavy metal” music. He is referred to as “one of the first rock-n-rollers” because he challenged “societal norms”.

Dani Filth, singer with Cradle Of Filth, is quoted at length and is clearly an intelligent observer: “How can you fail to be fascinated by such a character?”

The article discusses the association between Crowley’s reputation and the collaborative lifestyles at one point of Kenneth Anger and members of the Rolling Stones. “In the early 70s Jagger disposed of all of his occult books, took to wearing a crucifix, and stopped returning Anger’s calls.”

Baddeley suggests, without supporting evidence, that “Jimmy Page has since downplayed his past flirtations with the doctrines of the Great Beast”. Later, it is again asserted that “Page turned his back turned his back on the teachings of the Beast in the 80s…”

Given its attempt at general appeal, it’s pleasing to see a not insubstantial reference to the Rites of Eleusis, characterised by Baddeley’s usual wit: “… scarcely Woodstock – or even Download – they were pretty wild in their fashion”. Nice also to see an open discussion of the use of vulgar acrostics in Ambrosii Magi Hortus Rosarum.

Rather unflatteringly, Baddeley refers to “the comical Current 93, or the more interesting but equally impenetrable Coil.”

Perhaps unsurprisingly, there’s a few sentences about Mr Crowley as performed by Cradle Of Filth – better, apparently, then Ozzy’s original and Marilyn Manson.

The general tone, though, is a focus on Crowley as “quintessential showman” who “would not have courted the bed-sit intellectuals”. He’s probably not wrong there!

Anyway, I recommend the magazine as being of exceptional quality and seriousness of intent in an area all too well known for its flippancy and posturing. There are many articles – several written by Baddeley – covering Hawkwind, Jimi Hendrix and others, all mixed nicely with a substantial helping of the occult. 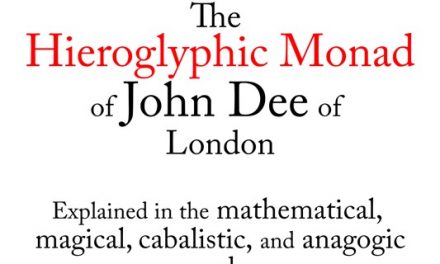 The Hieroglyphic Monad by John Dee