The latest Thelema Coast To Coast podcast has been announced elsewhere on this site in the following terms:

* Opening Remarks
* Listener feedback about the OTO as a cult, publishing Crowley, and Thelema and Lonelygirl15
* Interview with the founders of Ordo Magni Operis
* Discussion with Keith418 about equality, desire, and transgression in Thelema
* Interview with Stephen Skinner about his new book, The Complete Magicians Tables
* Closing Music: Wolves by Inner Surge

While by no means the most interesting Thelema Coast To Coast yet, I must draw attention to the fifth item on that list, where Stephen Skinner is interviewed at considerable length about The Complete Magician’s Tables…
Regular readers will know that I’m a bit of a “fan” of the Tables – see my review here: http://www.lashtal.com/nuke/Reviews-req-showcontent-id-47.phtml

In this interview, Mr Skinner is given a pretty free rein to discuss the issues behind the compilation of the Tables, to great effect. 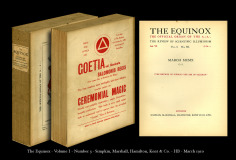