Two reviews of the Cameron Exhibition: one a fairly pedestrian effort from artforum.com; the second a very accomplished, informative and perceptive one from John Perreault.

Read more for extracts…
First is from artforum.com:

The first drawings one encounters in this exhibition herald a talent abundant enough to work assuredly in varied styles. One is a colored-pencil study of a three-headed siren whose body consists of artichoke-like overlapping leaves; another is an extreme close-up of a woman’s face, rendered in ink as if doodled in an architecture wire-frame program; a third is a small, ethereal pencil study of a child sketched with the casual virtuosity of a nineteenth-century academic painter. Marjorie Cameron Parsons Kimmel, known as Cameron, was a prodigiously talented draftsperson, but the diversity of this initial flurry is somewhat misleading. The majority of the drawings in this large exhibition, the first solo gallery presentation of the late artist’s work, are like the siren, and bear the influence of the dark visions she experienced from childhood and her interest in Aleister Crowley’s occult mysticism. They are a shadow that gives clearer form to our understanding of West Coast Beat culture. Cameron worked in series, from black-ink “Slaves,” 1966, suspended in the middle of blank pages as if possessed, to “Pluto Transiting the Twelfth House,” 1978–86, in which faint figures emerge from clouds of thin vertical strokes that seem to vibrate on the page. Eight heads peek from within the torqued, billowing scaffolds of color in Fairy Queen and Fairy King, both 1962. An undated work, Untitled (purple figure), looks like what Aubrey Beardsley would have created on an opium comedown. Each style is distinct yet unmistakably Cameron’s, and the drawings of many contemporary “goth” artists, Chloe Piene and Cameron Jamie among them, are presaged in these hallucinatory visions. The exhibition is timed to coincide with “Semina Culture: Wallace Berman & His Circle” (Cameron was a key member of the circle) at NYU’s Grey Art Gallery, which is on view through March 31 and is also recommended.

By the time you read this, the exhibition of elegant, out-there drawings by the infamous Cameron may be closed (Nicole Klagsbrun Gallery, 526 West 26th Street, No. 213, through February 10). I usually post my essays inspired by current exhibitions while said offerings are still available. But this time around I want to make an exception.

I wanted to beat The New York Times and the Village Voice on the David Hammons show, and I needed time to read through Aleister Crowley’s Diary of a Drug Fiend, 1922. Down below, you’ll see why.

Crowley’s Book of the Law (1904), supposedly dictated by an angel, is available on the internet. It is a wee bit obscure. Diary, on the other hand, is over the top and entertaining in an appalling way. According to a friend of mine, who should know about such things, it perfectly captures the bliss and then the degradation of cocaine and heroin. The two narrators are, of course, totally unreliable in this modernist or post-modernist romp disguised as a Victorian cautionary tale.

Now when I see East Village junkies on the street or hopheads in a Target off the L.I. E., I’ll know what’s going on in their minds, and their lives, and why they think nobody notices their party. Crowley’s cure, in the final “Purgatorio” section of Diary is less convincing, although the list of excuses offered for taking drugs is both hysterically funny and definitive —

1. My cough is very bad this morning.
(Note: (a) Is cough really bad?
(b) If so, is the body coughing because it is sick or because
it wants to persuade you to give it some heroin?

27. …Suppose I take all this pains [sic] to stop drugs and then get cancer
or something right away, what a fool I shall feel!

I then learned from Roger Hutchinson’s level-headed Aleister Crowley, The Beast Demystified (Mainstream Publishing) that Crowley was able to maintain his heroin habit by medical prescription until his death in 1947. Seems he was given heroin in his youth as an asthma cure. Or as someone once said, physician cure thyself.

The inspiration for several novels and short stories, magus Crowley once tried to hijack the Golden Dawn brotherhood from poet W. B. Yeats, founded a “religion” called Thelema, and was called the wickedest man in the world. According to his deathbed nurse, his last words were either “I am perplexed” or “Sometimes I hate myself.”

I was more than intrigued by the Cameron (1922-1995) presence in the “Semina” exhibition at the Grey Art Gallery, so seeing the exhibition at Klagsbrun was a given. And sure enough the art topics just flowed. Topics? Problems, would be a better term. Not problems in the negative sense, but problems, as in geometry or algebra. The big problem is: Must you separate the art from the artist? Can you?

I need to confess that after seeing Curtis Harrington’s short film The Wormwood Star (1955) in the Klagsbrun Gallery, I was hooked on Cameron’s image. She is shown in her studio among her now lost or destroyed artworks reciting some of her writings. Even on the gallery’s small monitor, she dominates the room, the gallery, the building, the block, and all of Chelsea. Not all of Manhattan, mind you; but certainly all of Chelsea.

So I rented “cult-director” Harrington’s full-length fiction-feature Night Tide (1961). The young and handsome Dennis Hopper plays the sailor in love with…I won’t be a spoiler. Let us just say that the object of his attraction makes her living by sitting in a tank of water on the Santa Monica pier. Cameron plays the mysterious woman calling back the heroine to her watery roots. We do not remember Linda Lawson’s Mora, but we certainly remember Cameron’s Water Witch.

Then, being a scholar, I had to rent Kenneth Anger’s Inauguration of the Pleasure Dome (1956), in which Cameron, as The Scarlet Woman upstages Henry Miller’s onetime paramour Anais Nin. Yes, Anais Nin.

The film, which involves a lot of posing, posturing, and the swallowing of necklaces and gems, builds to a ritualistic climax of luxurious superimpositions. These days it does seem, alas, like stoners playing dress-up, but Cameron burns a hole in the film. Aside from wearing a cape once worn by Rudolph Valentino, she is almost too real. She was certainly not afraid of using lots of eye make-up and staring right into the camera lens with those lucid eyes of hers.

After Cameron’s marriage to rocket scientist Jack Parsons – whose “working” he thought had summoned her — our art witch spent some time in a Swiss convent and then the arty Mexican village of San Miguel Allende where she met Lenora Harrington, the surrealist painter. Co-curator Michael Duncan, who wrote the informative Klagsbrun Gallery catalog essay, sees Cameron’s art as related to Harrington’s.

Cameron returned to Parsons. I guess the art colony in San Miquel was too rarified. In 1952, Parsons, a disciple of Aleister Crowley, was killed by an explosion in his garage – an explosion that is usually called “mysterious.” How could an explosion be “mysterious” in comparison to trying to make an homunculus using the Enochian calls of the Elizabethan magus John Dee?
I dare not tell you what science fiction author, in the Babalon working, played Edward Kelley to Parsons’ Dee.

After Parsons died, Cameron “retreated to the desert of Beaumont, California for a kind of ‘vision quest’, living for a while in an abandoned canyon without water or power,” reports Duncan.

We have already related the tale of Marjorie Cameron’s 1955 tangle with the L.A. police over her “lewd” peyote-inspired drawing. She and artist Wallace Berman vowed never to show in a commercial art gallery again. Later she torched a lot of her work and then made it known that she did not want what remained shown until after her death.

So with a life like that, how can we look at the art? Well, tenderly, cautiously. Perhaps Parsons’ 1946 desert ritual worked. After World War II, the empowerment women gained through serving in the war effort, lingered and slowly began to flower. The women in post-War noir emblemized men’s fear, but the so-called Scarlet Woman could not be stopped.

The angels and demons in Cameron’s trippy drawings release a perfume we have not experienced before. Certainly not in the academic surrealism of Harrington, whose charm has always escaped me. The surrealist Pope Andre Breton flirted with occultism. Cameron lived it.

Now ye shall know that the chosen priest & apostle of infinite space is the prince-priest the Beast; and in his woman called the Scarlet Woman is all power given. They shall gather my children into their fold: they shall bring the glory of the stars into the hearts of men.
…Aleister Crowley, The Book of the Law. 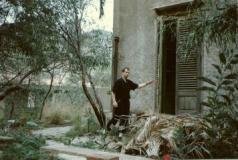