A London Times interview with actor Jim Carrey in which he discusses his latest film project, The Number 23…

The real man behind The Mask

In a rare interview, a downbeat Jim Carrey talks sanity, stardom and Scientology with Chris Ayres.

I am about halfway through my interview with Jim Carrey when the actor’s face tightens, he leans sharply forward, and he demands: “Can you tell me who built the Great Pyramid of Giza? Which pharaoh, I mean?”

The 45-year-old actor, dressed today in catburglar black, fixes me with a look of almost childlike inquisitiveness. It’s then that I notice that his face seems to belong to a different person from his hair, which falls long and lank towards his shoulders. His face seems older, thinner — sadder — than the hair. In fact, if you’d never met Carrey before, you’d barely think he was capable of a joke, never mind some of the greatest comic turns in recent Hollywood history.

That said, he’s a likeable presence, regardless of the recent bad press: faultlessly polite, downbeat but not surly. It’s his subconscious that causes the problems: it’s like a firehose, blasting out theories and ideas at maximum pressure. Hence his urgent inquiry about the Great Pyramid.

I tell Carrey that I have no idea who built it. “Right,” he says, victoriously. “It’s the greatest monument that’s ever been built, the greatest human structure ever built — and you don’t know who built it, a mere 2,000 years later! My point is: whoever built it did not achieve personal greatness.”

Greatness is clearly much on Carrey’s mind these days. With his latest project, The Number 23 , soon to arrive in cinemas, there are some who believe that his days as Hollywood’s $20 million man are over. His most recent blockbuster projects — Used Guys and Ripley’s Believe It or Not! — have both stalled in production, movie studios are panicking about budget and salary inflation, and Carrey recently fired Nick Stevens, his agent of 15 years, for whom he once bought a new Porsche.

That, along with his interest in more serious acting roles, concern over his gaunt appearance and mental health (he urinated on the set of The Number 23 during one scene, the footage of which was unusable), have added up to a rough few months for Carrey. This, after all, is a man so ambitious that he once sat on a patch of dirt off Mulholland Drive and wrote himself an undated cheque for $10 million. He was penniless at the time. A few years later, after being paid $10 million, he cashed it.

Carrey arrived at the epiphany about the Great Pyramid of Giza via the Macedonian conqueror Alexander the Great, the subject of a documentary the actor had just watched. Carrey saw a bit of himself in the military tyrant, and concluded that unlimited success in any field is pointless because, ultimately, who’s going to care? If this strikes you as slightly messianic — the logical extension being that Carrey believes he must compete with Jesus for career endurance — then, well, welcome to Hollywood. “People talk about egos being out of control, but actually what [unlimited success] is, it’s the ego being in control, the illusion that you’re going to be known forever,” he explains.

In other words, Carrey has realised thathis roles in The Mask, How The Grinch Stole Christmas and Bruce Almighty won’t spare him from the fate of any mere mortal. “So,” says Carrey with a dark frown, “f*** Alexander the Great.”

Now that he has his private jet, his Saleen S7 car (the one Bruce Almighty got when he became God) and his 400-acre ranch in Canada (“my little nudist colony”), you get the feeling that Carrey desperately needs tochannel all that insane energy into something else.

“Honestly, what I really want now is to be happy spiritually, at peace,” he says. “What life is about now is understanding that none of the things I do in showbusiness are my actual identity, that life’s a costume party, and that, y’know, it should be fun, a form ofplay. So it’s about doing that in a bunch of different areas.

“I started ice-skating again. I’m skating every week now, learning how to do really fun stuff, and playing hockey. I’ve been doing a lot of paintings and I’m writing a book. It’s just my thoughts on everything. It’s called Be Ready to be OK .”

As of now, there is no publication date for Be Ready to be OK . For the time being, fans will have to make do with The Number 23 , a movie about one man’s obsession with, yes, the number 23. In fact, this is a real-life phenomenon known as the 23 Enigma, followers of which claim that the answer to the Universe somehow lies with those two digits: the Earth spins on an axis of 23 degrees, for example, and the human genome contains 23 homologous pairs of chromosomes.

Carrey has long had an interest in the 23 Enigma, which is why he was so keen to make the movie, directed by Joel Schumacher — who appears to have put an end to Carrey’s off-camera drama while making an artsy yet populist film that sits well alongside, say, The Truman Show . Amid the leftfield concept and the Dennis Potterish stylisation lies a good old-fashioned whodunnit.

Carrey’s real-life mental problems go much deeper than a number obsession, however. “I’ve gone through periods when I couldn’t shut off the conversations in my head,” he says. “That’s kind of a form of insanity, when you can’t control it, when it’s taking over.

“But they’re not disembodied voices that I’m scared of hearing, or anything like that — it’s just like I cast people who I know, who I’ve met, who I’ve had moments with, as my [mental] adversaries. It’s just anger coming out.”

This thought triggers a defence of the Seinfeld actor Michael Richards, and his recent racist tirade in an LA comedy club, captured on mobile phone video and circulated on YouTube. “He doesn’t hate anybody, man,” says Carrey, who knew Richards back when he was making his way from Canadian nobody to Comedy Store regular. “I know that if there was an African American fallen in the street, he would pick them up and help them out. He was just super-superangry and bitter at that moment. When you’ve got a lot of seething anger inside of you, and suddenly somebody triggers it, you pick up the biggest rock you can find. It’s unfortunate that those people in the audience had to hear that. But I look at it and go, y’know, it’s a hard lesson, but [Richards] is going to learn a s***load about himself through it, and it would be a drag if people wrote him off as a result of it.”

The speculation in Hollywood has long been that Carrey’s spiritual quest would eventually move him in the direction of Scientology — especially given that he and his girlfriend, the actress Jenny McCarthy, have been spending so much time with the Cruises. Carrey, who has been married twice before and was once engaged to Renée Zellweger, rules this out emphatically.

“I don’t think I’ll ever belong to an organisation, because organisations corrupt,” he says. “It’s the natural course of things, when you have to protect the organisation from outside influences, or when you’re trying to change people’s minds. It’s tough when egos get involved and they’re trying to bend the will of another person, ratherthan allowing them to come to it if they see it.”

Carrey says he shares the belief of Scientologists that “people create their own lives, that they’re responsible for their own lives”, but that seems to be where the similarities end. “I know people who are Scientologists: good people, fine people. I don’t know how much of it is controlling, and how much of it is just being helpful for the sake of helping. I’ve heard things about the pressure that can be exerted, but that’s true of a lot of religions.”This is the point at which Carrey, via radical Muslims and the Crusaders, gets on to Alexander the Great — and hence the Great Pyramid.

And that’s when you realise that he still cares more about success in Hollywood than perhaps his spirituality allows him to say. “As far as movies go, whether they’re funny or not funny, or both, I wanna make ones that are a bit different, original, that give you something to chew on a few hours afterwards,” he explains. “The ultimate dream would be for someone to leave the theatre and say: ‘Something I saw in that movie makes me a little bit different, a bit better, I can never be what I was before.’

“That would be fantastic, that’s the kind of thing I’d love to do.”

As for the answer to Carrey’s question, it was the Egyptian pharaoh Khufu who built the Great Pyramid. In fact, many refer to it as “Khufu’s Pyramid”. Maybe there’s hope for Jim Carrey’s greatness after all.

The Number 23 opens next Friday 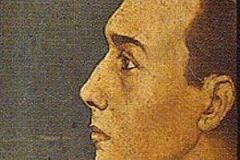