For Sale: An Extraordinary Collection

I don’t recall previously feeling more inclined than I do now to replace the usual list of News here with just one single News item.

If you choose to read on you’ll find details of a collection of works being offered for sale by one of the most significant collectors of works by and about Aleister Crowley: Lutz Lemke. He also happens to be, in the guise of the_real_simon_iff, one of the most regular contributors of information, images and articles to LAShTAL.COM.

Without going into details as to the reason for his appeal for funds – you can see some of those details in his Blog on this site – I want to draw your attention to his current list of items for sale, which includes:

You owe it to yourself and your commitment to the legacy of Aleister Crowley to put in an offer for some of these pieces — and don’t you dare let me find out that you’ve paid only the asking price…
Due to silly circumstances I really have to make some money and unfortunately have to say goodbye to some goodies from my collection. Since these are money-raising weeks, these items can be bought here until the end of May and 5% of the sale price is going as a donation to Lashtal.com for the upcoming server change. If everything goes, this will be far more than 100 Pounds. After end of May the items will go on ebay probably. If you need more information about anything please don’t hesitate to PM me, also if you need to know the exact shipping costs. I will ship anywhere and accept Paypal payment or direkt bank account transfer. I have uploaded a picture with the stuff to the galleries, hopefully Paul will admit it soon. Thanks in advance.

1. Aleister Crowley: a handwritten postcard to Nina Hamnett. No date, but probably written in September 1930, when he stayed at the Hotel Paris in Lisbon, Portugal together with Hanni Jaeger, a stay that culminated in the famous „Boca Do Inferno“ hoax. Unfortunately the stamp has been removed, so exact dating is not possible. The text of the card is a well-known limerick, I can’t say if the postcard is the first appearance of that limerick. The postcard is a little worn, but in an overall still good condition. Please see pictures. UK Pounds 611.

3. John Symonds, Conversations with Gerald. Duckworth, 1974, 1st Edition, Hardback with Dustwrapper in fine condition. Previous owner’s signature on first blank page. Symonds became literary executor to Gerald Hamilton and published this account of Hamilton’s adventures. Some passages about Aleister Crowley also, since he first met Hamilton while researching his 1st book on Crowley whom Hamilton had known. Together with this book comes a collection of nearly 40 letters to Symonds, from 1954 to 1987, among them letters from Francis King or John Naylor and other names not unknown, letters regarding Symonds’ AC biographies, letters regarding research of other people, but also confused and weird manifestos from one Damian N. of the „Ordo Templi Orientalis“ as well as a reminder that Symonds’ readers ticket for the British Museum has become out of date. Also one letter from Symonds to Francis King in which he clearly states his views on the AC copyright situation as well as the „real“ Outer head of the O.T.O. Comes in a nice binder. UK Pounds 222.

4. Ithell Colquhoun, original artwork, not dated (One of seven panels here illustrated). 8ins x 35 in. Pen and watercolour on joined pieces graph paper, obviously intended to create a model of the Golden Dawn vault of the adepts used in the Adeptus Minor inititation. Also enclosed three sides of handwritten notes upon the subject by Ithell Colquhoun plus two preliminary pieces of artwork. Marks on reverse indicate that the model was constructed and used. UK Pounds 399.

5. Aleister Crowley, handwritten note to „my dear Mines“. Dated May 10, probably 1917. Over 40 words on paper with his address in Washington from 1916 to 1917, and the strange printed slogan: „Autograph vs. Holograph – Reason Indicated Below“, probably a joke stationery. Bears his full autograph, Aleister Crowley. Comes with an „explanation“ of the letter, written by the former owner. Please see picture. UK Pounds 411.

6. Aleister Crowley, handwritten letter to F. West-Kelsey, dated December 25 1937. Together with handwritten envelope and stamps. Written on Great Western Royal Hotel stationery, but Crowley already had left then and he corrected his new address. Circa 120 words handwritten on 2 sides of the paper and signed with Thelemic greetings, and simply „666“. Please see picture. UK Pounds 611.

7. Aleister Crowley, The Stratagem, & Other Stories, Mandrake Press nd 1st Ed (c1930) Small format 139pp, Also has the Testament of Magdalen Blair, His Secret Sin. Quarter cloth binding with boards covered in snakeskin like paper and a paper label on spine. Overall in Very Good condition in a facsimile of the dustwrapper, but a really astonishingly convincing facsimile. The dustwrapper is important as it carries an plan relevant to the Stratagem story. Your chance to own a real Aleister Crowley first edition. Please see: http://www.lashtal.com/nuke/module-pnMe … -202.phtml UK Pounds 133.

8. The Star & the Garter (The Star and the Garter). Popular Edition Hardcover. Quarto. 80pp. Original green/black ‘camel-hair’ wrappers with white lettering on upper wrapper, rebound in modern black binder’s cloth, with gilt title down spine. Crowley felt that The Star & the Garter “contained some of my best lyrics” and was also”important in marking a new step in my poetic path [for] I had mastered form better than I had ever done before” It was first published by Watts and Co. in 1903 in an edition of only 52 copies. Crowley published this “Popular Edition” the following year “with the idea of reaching the people who might have been unable to buy my more expensive books.” Though much favoured by Crowley, the “camel hair” (actually a soft paper compound) binding material was not at all durable, and copies often lost their spines and/or wrappers. In this case the original wrappers were retained, and the whole put in a rather cheap, modern cloth binding, Both wrappers and text block have been trimmed at the edges to facilitate the rebind. The cloth itself has is somewhat marked on the front board, almost as if a large label had been pasted there and removed. As noted above, the text-block and wrappers have been cropped, and there is some scattered light foxing and a couple of pencil marks in the margins. Otherwise it is in VG condition. I was just about starting to rebind it to ist original state when another copy crossed my way, so this one is for sale now. Please see: http://www.lashtal.com/nuke/module-pnMe … -268.phtml and for the rebind http://www.lashtal.com/gallery/displayi … p?pos=-934 UK Pounds 211. 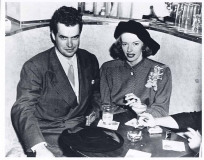