For those of you with lots of spare money: There are two bound manuscripts of the Old Man for sale, “The Soul of Osiris” and “The Mother’s Tragedy”, final drafts with extensive revisions. Also for sale: A heavily inscribed “Konx Om Pax”.

CATALOGUE NOTE: The long authorial inscription dated 19 January 1909 to an anonymous recipient provides an illuminating insight into the production of this collection of poetry, plays and essays. Crowley refers to the book’s binding (“much better than the previous effort”: the first 250 or so copies had been bound in black buckram) and cost (“I am putting up the cost to 10 shillings… why this book was so very expensive to produce I don’t know – but it was!).

CATALOGUE NOTE:”This book is the History of every Soul. Symbols and Names may change: but the Truth that lies below is of the All-Truth. This History is written in blood: it is no bird’s eye view of the Pilgrim’s Progress, seen by a dweller of the Land of Beulah: every page was at the moment of its being written, the actual expression of the heart’s desire…” Crowley’s heavily revised manuscripts of two interconnected literary works, and the most important crowley literary manuscripts to appear at auction in many years. These are among the earliest of his works to incorporate the occult teaching of the Order of the Golden Dawn, and were written in the years following his initiation into the order, largely during his travels in Mexico and Asia. These volumes gather together manuscripts written at various times using different paper (from ruled notepaper to headed stationery of various London hotels) and different writing utensils. Despite Crowley’s claim quoted above that his poems captured a moment of profound experience, the deletions and revisions found throughout these manuscripts show that he regularly revised his works. The Soul of Osiris and The Mother’s Tragedy were issued as companion volumes in 1901 (Crowley has originally intended that they should form a single work), either from these manuscripts or from typescripts directly derived from them. These manuscripts contain most but not all of the poems found in the printed volumes, the most significant exception being the poem ‘Jezebel’. The Soul of Osiris is divided into four parts: The Court of the Profane, the Gate of the Sanctuary, The Holy Place, and The Holy of Holies. In 1905 the two volumes were reworked by Crowley into The Temple of the Holy Ghost. This incorporated the sectional titles of The Soul of Osiris, but included most of the poems from both of the earlier volumes albeit in a different order. 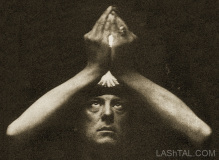