Our new teaser trailer for the Abbey Of Thelema is up at http://youtube.com/watch?v=kRoUIR2qTsg

Critics said we would not film a feature film in TEN DAYS—well, they were right, WE FILMED IT IN NINE DAYS!

My congrats to the crew and cast and all of our supporters, and especially to the city of St Louis that let us use the old Court House free of charge. Special thanks also to all those who opened up their homes for filming and also the restaurant Bevo Mills for allowing us to film two scenes there. John Paul is about half way editting the rough cut. We will start showing private screenings of the rough cut around the country starting August 1, 2007…
Some interesting pieces of information on IMDB about the movie http://www.imdb.com/name/nm1079830/: 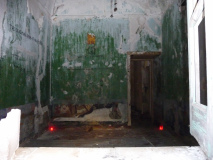